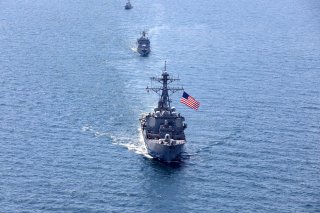 The U.S. Navy has deployed four Arleigh Burke-class destroyers to the U.S. Sixth Fleet area of operations in support of NATO operations in Europe.

“The U.S. Navy destroyers USS The Sullivans (DDG-68), USS Gonzalez (DDG-66), USS Donald Cook (DDG-75) and USS Mitscher (DDG-57) are operating in the European theater of operations,” U.S. Navy spokesman Cmdr. Arlo Abrahamson said in a statement. “Throughout their deployment, they will participate in a range of maritime activities in support of the U.S. Sixth Fleet and our NATO allies.”

The four warships left their homeports of Norfolk, Virginia, and Mayport, Florida in January. While the U.S. Navy announced that the deployments were not in response to any actions or any anticipated actions by Russia, the ships will operate as part of the Sixth Fleet, which is headquartered at Naval Support Activity Naples, Italy.

Abrahamson said that the deployments were designed to provide additional flexibility to the U.S. Sixth Fleet.

"It's designed to demonstrate NATO's ability to integrate the high-end maritime strike capabilities of an aircraft carrier strike group to support the deterrence and defense of the alliance," Pentagon spokesman John Kirby said in January.

The group also operated with the French Navy's flagship, aircraft carrier FS Charles de Gaulle (R 91) and its escorts, which served to highlight NATO's resolve to maintain freedom of navigation in the neutral waters of the Mediterranean.

USNI News also reported that the composition of ships in Sixth Fleet is the largest gathering of U.S Navy vessels in the region since 2018.