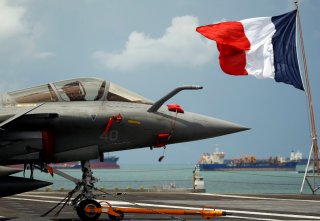 The French Marine Nationale flagship Charles de Gaulle and its carrier strike group (CSG) departed from Marseilles on Tuesday to begin the CSG’s first operational deployment of 2022, which will take place until April. The carrier and escorts are now headed to the eastern Mediterranean and will take part in the "Clemenceau 22" exercises. This will be the carrier's fourteenth mission, during which it will demonstrate its interoperability with multiple ally and partner navies.

The Charles de Gaulle CSG will be part of Task Force 473 (TF 473), which will include warships from the European Union, NATO, and French partner nations during the deployment.

The U.S. Navy stated last week that the participation of the Sixth Fleet's USS Ross was meant to demonstrate "the interoperability level between U.S. and French naval forces." The statement continued: "While TF 473 operates in the Mediterranean with an integrated U.S. destroyer, Naval Striking and Support Forces NATO, working in close coordination with other commands throughout the alliance, is exercising command and control of a U.S. carrier strike group. The flexibility of command and control structures among allies supports the collective defense of Europe."

As part of the Clemenceau 22 mission, the French CSG will also conduct "tri carrier operations" with the Italian Navy's flagship aircraft carrier Cavour and her CSG, along with the U.S. Navy's Nimitz-class USS Harry S. Truman CSG. It will be the first time this year that two foreign navy nuclear-powered aircraft carriers operate together. Currently, only the U.S. Navy and the French Marine Nationale operate nuclear-powered carriers.

The main purpose of the upcoming exercise is to maintain interoperability between allied navies and train with new assets, including Italian F-35Bs, and American E-2D Advanced Hawkeye aircraft.