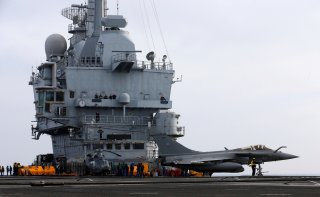 As of this week, 950 sailors have tested positive for COVID-19 aboard the USS Theodore Roosevelt (CVN-71), while a second sailor has been sent to an intensive care unit, as the ship remains at Naval Base Guam. It has taken the ship out of service, but it is far from the only aircraft carrier to be dealing with an outbreak of the highly infectious coronavirus.

Across the world, France's sole aircraft carrier, Charles de Gaulle, has also returned to port as 50 members of its 1,760 sailors have tested positive. According to a ministry statement, three sailors had already been evacuated by air to a military hospital in Toulon in southern France, the home port of the carrier, despite the fact that the aircraft carrier is equipped with its own intensive care facilities.

"The first cases showed symptoms recently," the ministry said in a statement as reported by NPR. "There are no signs of aggravated cases among the patients."

Even as the ship headed back to port extra measures aimed at protecting the crew and containing the spread of the coronavirus were put in place, and that included the wearing of face masks by the entire crew.

The nuclear-powered aircraft carrier is the French Navy's flagship, it entered service in May 2001, after what was seen as a troubled fifteen-year construction period. At the time of its launch Charles de Gaulle was the world's most advanced carrier outside the United States Navy, and like the USN it is the only carrier to utilize catapults to launch aircraft. The ship displaces just 40,000 tons and is similar in size the U.S. Navy's Wasp-Class amphibious assault ships.

Charles de Gaulle had been recently taking part in exercises in the Baltic Sea with other European navies, and was originally scheduled to return to the Mediterranean port of Toulon on April 23 but was ordered back to port early as a precautionary move. Sailors who have been showing symptoms are being placed in isolated confinement.

While many warships are returning to port, the United States Navy announced this week that the USS Harry S. Truman Carrier Strike Group (CSG) would remain at sea off the East Coast of the United States, despite the fact that it has completed its most recent deployment. This is part of an effort to keep the crew healthy from the COVID-19 pandemic and remain combat-ready to take on missions if needed.