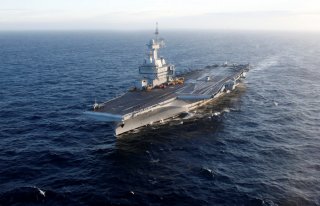 The aircraft carrier Charles de Gaulle, flagship of the Marine Nationale, returned to service late in September after completing a three-month-long maintenance period.

The recent maintenance focused on the modernization of the carrier’s combat system. Living conditions for the crew were also improved. The vessel conducted sea trials in September.

“Now it’s time for the ship to get back up to speed,” the French Navy said in a statement, reported by Naval News this week. “For this new crew, which has been in place for three weeks now, it is a matter of continuing to learn about this complex ship; to get to know it in its smallest details for those who have just arrived, and to share their knowledge for the older ones.”

Charles de Gaulle is expected to take part in the upcoming “POLARIS” exercise later this year. The exercise will place the carrier and its strike group in a high-intensity combat preparation scenario. That large-scale exercise will reportedly involve the French Army and French Air Force, as well as nearly fifty percent of the first rank (front line) surface combatants of the French Navy.

Charles de Gaulle is the 10th French aircraft carrier and the first French nuclear-powered surface vessel. It is also the only operational nuclear-powered carrier apart from those in service with the U.S. Navy. As of 2021, she is also the only non-American carrier vessel to utilize a catapult launch system, which has allowed the vessel to operate with F/A-18E/F Super Hornets and C-2 Greyhound aircraft.

The carrier is named for French statesman and General Charles de Gaulle. It endured several setbacks and delays during a 15-year construction period before entering service in 2001.

While the Charles de Gaulle is expected to remain in service until 2040, Paris has already been thinking about the next carrier. Porte-Avions Nouvelle Génération (PANG) is the next-generation nuclear-powered aircraft carrier under development for the French Navy. Construction on the warship is expected to begin in 2025 with the vessel’s commissioning expected for 2039. The French aircraft carrier will be constructed at Chantiers de l’Atlantique shipyard in Saint-Nazaire, France.

The Armed Forces Ministry has already committed €261 million ($305.9 million) to future studies for the PANG program. It has previously been speculated that the PANG would likely be nuclear powered with two K22 reactors and that the future warship would be larger in size than the Charles de Gaulle. It is also expected to have an air wing that would include thirty-two next-generation fighter jets.

While French president Emmanuel Macron officially green-lighted the construction of a new nuclear-powered aircraft carrier as part of the PANG program in December 2020, there has been little news on the progress since. It seems that for now the French Navy is focused on returning its current flagship back to service.