The French Chauchat Was Filled with Problems, But It Was Not the Worst Machine Gun Ever 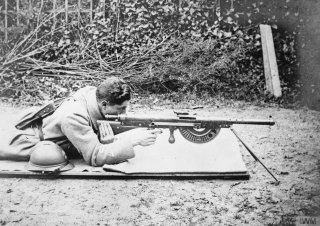 Firearms design is a tricky thing, for every excellent firearm there are dozens of forgotten weapons. However, just as many of the best machine guns are remembered, so too are the bad ones. This is certainly the case of the World War I era "Fusil MitrailleurModele 1915 CSRG" (or Machine Rifle Model 1915 CSRG) – more commonly known as the "Chauchat." It has earned a reputation for being "the worst machine gun ever created."

More than 100 years after it was introduced during the war, it still has a reputation that is even worse than the French soldiers who carried it.

Over the years, this reporter has heard the negative comments from others at museums, at military collectible shows and of course online. The words, "that's the worst machine gun ever" have been said so often by so many, but ask many of those people why and you really only get vague answers at best.

One of the most common complaints is that "it got a lot of American soldiers killed during World War I." That's completely inaccurate, because technically German bullets were what cut short those American lives, not the French-made automatic rifle/light machine gun.

But here too is the root of the problem. The Americans who carried the Chauchat – and dubbed it the "sho-sho" – hated it. They complained about it because it was awkward to carry compared to their Springfield M1903 bolt action rifle. The bigger issue is that the original Chauchats issued to the Americans weren't fresh from the factory; these were weapons that had been used hard for a year or two in the hell that was the trenches of the Western Front.

The Chauchat quickly earned a reputation for jamming, but one factor was that the Americans weren't issued cleaning kits for the weapons and few – if any – of the Doughboys who went "Over There" had even seen the gun before it was issued to them. They were given no formal training in its maintenance.

To sum up, the American soldiers were provided a foreign-made weapon that had been used and likely even abused and had no training with it. There were no English-language manuals and the French instructors seemed indifferent at best about helping their new Allies.

Some 16,000 Chauchats were issued to American troops that were chambered in the 8mm Lebel, and the truth is that if the weapon was maintained it performed reasonably well.

Another issue is that the French did produce another 19,000 Chauchats chambered for the American .30-06. This too seems to be part of the firearm's bad reputation, as a high number of American Chauchat gunners who used the French 8mm Lebel versions were decorated for their service, while the number is much smaller with those who had the .30-06 version. Tests over the years, including some that were conducted as recently as 1994 did show that the weapon had an extraction problem with the American cartridge – likely caused by incorrect chamber measurements and substandard manufacturing.

The biggest factor was that the Chauchat was being used just as the M1918 Browning Automatic Rifle (BAR) was entering service. That weapon had some issues during its early stages of 1918 including improperly tempered recoil springs. However, it has been widely established that General Pershing, commander of the American forces, had been holding back widespread adoption of the BAR until victory seemed certain for fears that it could be copied by the Germans. No doubt that resulted in resentment among the U.S. troops issued with the Chauchat.

It is true however that the Chauchat had a serious problem, but it is one that has also been overstated: namely the open magazine, which was actually intended to help a soldier know how many rounds were left. It is true that it let in dirt and mud, but many of the machine guns of the era had similar problems. The German MG08, the British Vickers and the Russian Maxim used cloth ammunition belts that often picked up mud and dirt, which often caused jamming.

The French Hotchkiss, which the British and later Americans also used, was loaded from long stripper clips that also could become fouled but in some cases would drop a cartridge, which would require the weapon's operator to recharge the weapon to keep firing.

In dubbing the Chauchat the "worst" it also overlooks its many innovative features. Unlike the Maxims/Vickers style machine guns, which were primarily defensive weapons, the Chauchat was designed as one of the first truly offensive automatic weapons. Even the Danish-designed Madsen was designed for static defense not forward movement.

The Chauchat was also the first light machine gun to feature a pistol-style grip, a feature still used today in almost all light machine guns. It also featured a forward grip, another common feature today with military assault rifles, and it also included a simple but effective bipod. This gun could arguably be seen as the forerunner to the modern squad assault weapon – and it was also the first weapon to offer selective fire.

Perhaps the most notable thing that can be said is that while it wasn't perfect it did offer advantages over the other weapons of the era, namely in weight. The Germans developed their own "offensive" weapon in the MG08/15, which took the sled-mounted MG08 heavy machine gun and added a bipod, pistol grip and side-mounted drum. It still weighed 60 pounds and took a team of two to use in attacks. By comparison the Chauchat weighed just 20 pounds, lighter even than the American-designed Lewis Gun.

It is true it wasn't a perfect weapon, but more than 100,000 were used in front-line service by the French and the Germans used many captured guns. If it was truly as bad as its detractors suggest the Germans wouldn't have bothered.

Given the influence that the Chauchat design had on later light machine guns, rather than "worst" it would be far fairer to describe it as the one of the most ahead of its time small arms, but one not without problems.