In the Future, the Army Will Have Super Weapons Like 'Iron Man' Suits and Liquid Body Armor 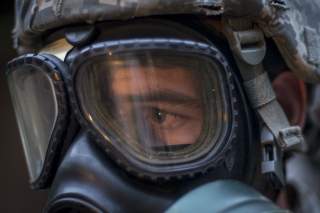 The implications of this kind of technology are significant. While exoskeletons have been in development for several years now, the technology consistently confronts the challenge of finding ways to sustain mobile power sources to support and sustain its functionality. Furthermore, current use of batteries brings significant combat challenges due to difficulty recharging and the massive amount of weight involved in hauling them through combat.

Energy-harvesting technology can extend mission life for small units or dismounted soldiers on-patrol. The emerging concept, described by Army developers as a technical breakthrough is engineered, not so much for the near-term, but 10 to 20 years down the road.

“The design is for an energy-harvesting exoskeleton to address the needs of dismounted soldiers. The system can derive energy from the motion of the soldier as they are moving around,” Dr. Nathan Sharps, mechanical engineer, Army Communications-Electronics Research, Development and Engineering Center (CERDEC) told Warrior Maven in an interview last month.

The implications of this kind of technology are significant. While exoskeletons have been in development for several years now, the technology consistently confronts the challenge of finding ways to sustain mobile power sources to support and sustain its functionality.

Furthermore, current use of batteries brings significant combat challenges due to difficulty recharging and the massive amount of weight involved in hauling them through combat.

For instance, should a soldier carry a portable 35-pound generator, water, ammunition, weapons and communications equipment, mission duration and soldier effectiveness is greatly impacted. The Army has been pursuing various efforts to “lighten the load” for soldiers for many years now.

“The technologies we are developing can produce electricity, which can be stored and used to power batteries. This increases the longevity of a mission, decreases the need for resupply and reduces the logistics trail,” Sharps explained.

An added advantage is that, while the technology harvests energy from the motion of soldiers, it also simultaneously eases the strain on their joints and muscles due to its apparatus.

“This decreases the chance of muscular-skeletal injury. We look at the soldier as an individual ecosystem. We’re not just looking at what they cannot do right now, but also at what challenges they are going to face 20 years from now,” Sharps said.

The emerging system, currently in the early phases of exploration, calls upon a collaborative effort between CERDEC, the Army Research Laboratory and the Army’s Natick Soldier Center.

The scientists explain that added electrical energy decreases the number of calories a soldier has to burn.

“When you move, you bounce up and down, and the gait motion is an inverted pendulum. If you lift every step thousands of times, it is a whole lot of energy you are expending,” said Juliane Douglas, mechanical engineer, CERDEC, told Warrior Maven.

The Army is currently exploring various configurations for the exoskeleton, some of which include a suspended backpack, which can slide up and down on a spring, having little or no weight impact on the soldier.

“In mechanical engineering terms, if you have masses moving together, there is a kinetic energy difference between the two. We have mechanisms which can convert that linear motion into electricity,” explained Douglas.

This technical advantage will impact a wide array of emerging systems now being built into exoskeletons. Not surprisingly, many of these rely upon mobile power to operate.

For example, helmets with high-resolution thermal sensors, wearable computers, various kinds of conformal body armor and even many weapons systems are now being built into a range of Ironman-like exoskeletons.

U.S. Special Operations Command’s current TALOS effort is working with a wide sphere of industry, military and academic experts on plans to build initial exoskeleton prototypes within the next year or two. This longer-term CERDEC effort is the kind of thing which could easily merge with, or integrate into, some of these exoskeletons now being built.

It “transforms from liquid to solid in milliseconds when a magnetic field or electrical current is applied,” the Army's website said.

Army evaluators have also been assessing a Lockheed-built FORTIS knee-stress-release-device exoskeleton with soldiers at Fort A.P. Hill as part of a focus on fielding new performance enhancing soldier technologies.

CERDEC developers say their effort is observing and working closely with many of these efforts looking to find exoskeleton technologies able to better protect and enable soldiers in combat.

“What we are doing is designing the conversion technologies to make many of these technologies more effective by storing the energy. We are testing prototypes, and we are able to leverage current exoskeleton work and use it as a platform for our systems,” Douglas said.

Yes, the U.S. Military Is Developing an 'Iron Man' Suit