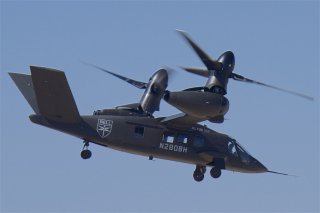 The Army envisions its Future Longe Range Assault Aircraft (FLRAA) will “augment” or fly alongside its upgraded Black Hawk helicopter and massively increase “combat power build,” speed, agility, and close-in maneuverability under hostile fire. There are some fundamental dynamics in terms of mission connecting the FLRAA and Black Hawk moving into the future.

Mission alignment and expansion are likely part of the reason why Lockheed-Sikorsky-Boeing built its DEFIANTX FLRAA at roughly the same size as a Black Hawk. The overall width of a Black Hawk is 53.7’, something similar to the DEFIANTX’s width of 56.6.  Interestingly, there is a specific aerodynamic reason for this: it enables multiple aircraft to successfully operate in close proximity to one another. This is a technical phenomenon known as “rotor downwash,” which happens when aircraft of a certain size generate turbulence or unstable air in the vicinity around them, making it impossible for other aircraft to operate nearby. The larger an aircraft is, the more “rotor wash” it generates, potentially making nearby aircraft vulnerable to unstable flight and even crash.

A related phenomenon, of particular concern with tiltrotors, is known as “Vortex Ring State,” an aerodynamic condition in which upward flow can generate turbulence, resulting in a loss of lift. According to a 2012 FAA Helicopter Flying Handbook, Chapter 11 “Helicopter Emergencies and Hazards,” Vortex ring is described as a  “state, in which airflow is upward on the inner blade section, producing a secondary vortex in addition to the normal wingtip vortices. Turbulent airflow results and loss of rotor efficiency. If allowed to continue, uncommanded pitch and roll oscillations may occur, with a large descent rate.”

The DEFIANTX is specifically engineered at a certain size, configuration to address and mitigate these risks and optimize aerodynamic performance. Essentially, downward rotor wash and Vortex Ring state concerns are not an impediment for the DEFIANTX, as it is being built with those concerns in mind. The DEFIANTX  is designed to operate in larger, potentially more consolidated attack formations in closer proximity to one another, providing attacking forces with a survivable, high-speed delivery mechanism for large amounts of infantry, firepower, or time-sensitive medical support. The DEFIANTX is intended to leverage and optimize “combat power build” for land attack by landing and dispatching coordinated groups of fast-advancing soldiers. The problem of rotor downwash or “vortex ring state”, however, could be significant with much larger platforms such as Bell’s tiltrotor aircraft, requiring much greater separation between aircraft.

An interesting 2007 U.S. Army paper called “The Fundamentals of Flight” further explains the “downwash” phenomenon, an aerodynamic circumstance that can generate unstable, turbulent air components in the surrounding vicinity of an aircraft when rotor blades generate a “downward flow of air.”  Naturally, the heavier and larger the aircraft, the more substantial and destabilizing this downward airflow becomes. It is one of several key scientific reasons why engineers built the DEFIANTX in its current configuration, a clear effort to enable faster, smoother, more condensed large-scale attack when and if necessary in warfare.

“As blade pitch angle is increased, the rotor system induces a downward flow of air through the rotor blades creating a downward component of air that is added to the rotational relative wind. Because the blades are moving horizontally, some of the air is displaced downward. The blades travel along the same path and pass a given point in rapid succession. Rotor blade action changes the still air to a column of descending air. This downward flow of air is called induced flow (downwash). It is most pronounced at a hover under no-wind conditions,” the essay writes.

The issue of needed separation is given specifics in an interesting article in Breaking Defense by Scott Trail, a former V-22 Osprey developmental test pilot and CH-46E helicopter pilot.

There are additional tactical reasons why an ultra-high-speed aircraft the size of a Black Hawk could prove advantageous, as a DEFIANTX is built with a measure of agility such that it can fly very close to the ground, thus below the radar, so to speak, and be less susceptible to enemy detection. The DEFIANTX is built with an aerodynamic configuration sufficient to fly at high speeds close to the terrain as low as 200 feet, making it much less vulnerable to enemy fire by reducing any angle of attack and of course minimizing radar signature.

“If you think of what a Black Hawk does when inbound to a [Landing Zone], then picture a 2030 contested operational environment. We will be flying twice as far and twice as fast but they still have to be very maneuverable in and around the objective area,” Jay Macklin, Sikorsky business development director, Future Vertical Lift, told Warrior Maven in an interview earlier this year.