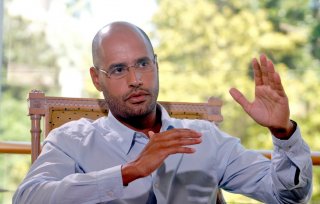 Libya’s electoral commission has ruled that Saif al-Islam Gaddafi, the second son of long-time Libyan dictator Muammar el-Qaddafi, is ineligible to seek the presidency in the country’s upcoming December elections.

Gaddafi was one of twenty-five candidates ruled ineligible by the commission; two other notable figures, head of the western General National Congress Nouri Abusahmain and former prime minister Ali Zeidan, were also excluded. All twenty-five will be eligible to appeal the decision; the issue will be decided by the country’s judiciary in advance of the elections, which are slated to take place on December 24.

So far, ninety-eight candidates have officially registered for the presidential race, most prominently and controversially including Gaddafi and Khalifa Haftar, an eastern warlord supported by Egypt and the United Arab Emirates who led the main campaign against the internationally-recognized government in Tripoli, Libya’s capital.

The disqualification took place at the recommendation of the country’s military prosecutor, who suggested that Gaddafi was ineligible based on his 2015 conviction for war crimes. That conviction stemmed from accusations that the younger Gaddafi had participated in massacres during his father’s initial attempt to suppress the 2011 protest movement that led to his ouster after a NATO intervention. After that intervention, Gaddafi was caught trying to escape Libya and imprisoned by local authorities in Zintan, a city in the country’s west; he was released in 2017.

Although the decision to hold the election as part of Libya’s reconciliation process was praised by some commentators and experts, it has also been criticized in some corners as inappropriate considering the country’s fragile politics. Moreover, inconsistencies in the country’s electoral law have led other candidates to be challenged. Opponents of Haftar, for instance, have suggested that he is ineligible for the presidency because he received United States citizenship during his 1990s exile in Virginia.

The country’s current interim prime minister, Abdul Hamid Dbeibah, has been attacked on similar grounds, as he has refused to step down from the prime ministership in the run-up to the election, as the law theoretically requires.

The commission, however, ultimately declined to reject the candidacy of either Dbeibah or Haftar, freeing them to compete in December.

Jan Kubis, the outgoing UN special envoy for Libya, told the UN Security Council on Wednesday that the country’s judiciary would be empowered to make final decisions regarding eligibility and electoral rules in the run-up to the election.