War Criminals Are Running for President In Libya 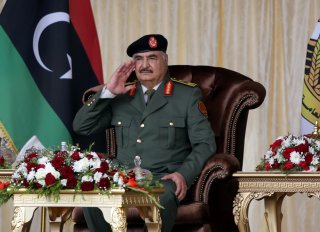 Gaddafi’s announcement was highly controversial, given his links to atrocities committed under his father’s rule. Although the younger Gaddafi was educated at the London School of Economics and was initially perceived as a possible reformer, he alienated many Libyans when he sided with his father during his crackdown against civilian protesters during the 2011 Arab Spring. For his actions during that period, he is also wanted by the International Criminal Court, raising questions about how he would be able to rule and conduct Libyan foreign policy if elected.

So far, Gaddafi’s main rival for the presidency appears to be Khalifa Haftar, an equally unpopular Libyan warlord who leads the Libyan National Army (LNA), the military of the Tobruk-based government.

Haftar served as an army officer under the elder Gaddafi but escaped to the United States after he was captured during a war against Libya’s southern neighbor Chad in the late 1980s. Although he lived in Virginia and gained U.S. citizenship, he continued to work with the CIA in attempts to overthrow Gaddafi, and after the Arab Spring, he returned to Libya to command its new army. Ultimately siding with the eastern government, he commanded the LNA during its unsuccessful push to capture Tripoli, the country’s capital and the seat of the western government, in mid-2020.

Haftar has also been accused of war crimes during his tenure, and some observers have argued that he intends to establish a military dictatorship if elected.

Libya’s elections have been tentatively scheduled for December 24, but that date is open to change if needed depending on the circumstances. So far, Gaddafi and Haftar are the only prominent candidates; current interim Prime Minister Abdelhamid Dbeibah is also likely to run, although it is unclear if he is legally allowed to do so.

The elections have been highlighted as a key factor in ending the conflict in Libya, alongside the unification of the two rival governments in Tripoli and Tobruk and the removal of foreign troops—particularly those from Russia, Turkey, and the United Arab Emirates—who the United Nations argued had exacerbated the conflict by supplying, training, or fighting alongside Libyan militias. These troops were scheduled to leave the country in 2020 according to the terms of a UN-brokered ceasefire but ultimately did not.