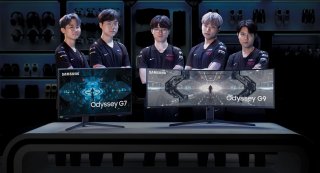 Samsung, back at CES in January, unveiled a line of curved gaming monitors with QLED screens. The Odyssey G7 monitor, with 27- and 32-inch monitors retailing at $699.99 and $799.99, opened for preorder earlier this month.

Now, the higher-end edition, the Samsung Odyssey G9, is open for preorder too, at a higher price tag of $1,700. It’s part of what Samsung describes as a reimagining of the monitor, “with gamers in mind.”

“The new Odyssey portfolio proves that Samsung is continuing to drive innovation with industry-leading technology and design that allow gamers significantly better performances,” Seog-gi Kim, Executive Vice President of the Visual Display Business at Samsung Electronics, said in the announcement at the time of CES. “Samsung’s new curved gaming monitor line-up has been completely redesigned to give gamers an entirely new and immersive experience.”

“Get your head in the game with the 49-inch Odyssey G9, which matches the curve of the human eye, for maximum immersion and minimal eye strain,” the Samsung website for the G9 says. “With the screen space of two 27” panels, you can truly take command on the battlefield.”

At CES, the G9 made a positive first impression on some reviewers.

“[When] I see the Samsung Odyssey G9 gaming monitor, and all I want to do is open my wallet as wide as its panel and throw my credit card at it,” wrote Williams Pelegrin of Reviewgeek. He added that “competitive e-sports players specializing in older titles will feel right at home.”

“It’s time to smash open the piggy bank, only to realize it isn’t quite full enough,” Tom’s Hardware wrote of the G9. “Samsung’s jaw-dropping Odyssey G9 just went up for pre-order on Amazon, and it costs a hefty $1700. But, it comes with a spec sheet to match its price tag, so it may tempt you yet… If you’re looking for one monitor that can do it all, this might just be the one.”

The G9 is available now, both directly from Samsung and through retailers, including Amazon.