From Gangland to the Frontlines the Tommy Gun Was Deadly 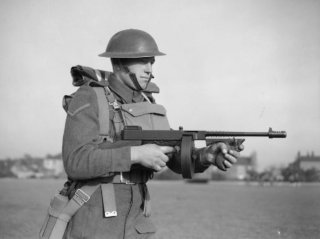 The Thompson submachine gun became notorious when it was used by Chicagoland gangsters in the infamous "Saint Valentine's Day Massacre" in 1929. The gun struck such fear into the general public, not to mention law enforcement, that lawmakers introduced the National Firearms Act of 1934, the first national gun control legislation. Still, the gun that earned colorful nicknames such as the "Chicago typewriter" proved more than up to the task when it was carried by U.S. and other allied soldiers during the Second World War.

The Thompson was actually developed a generation earlier and was intended for use during the First World War. Its namesake, General John T. Thompson, envisioned a semi-automatic rifle to replace the bolt-action rifles in use during the conflict and—along with Theodore H. Eickhoff, Oscar V. Payne, and George E. Goll—conceived the principles of a "one-man, hand-held machine gun."

Together, those men developed a platform that fired the .45 ACP round that was used in the Colt M1911 pistol. Thompson had been among the military officers who reviewed the tests of the John Browning-designed round in 1904. It is thus no surprise that Thompson—who had recently retired from the military to develop the weapon—would see that it would be chambered for that cartridge. It provided ample stopping power at close range and was light enough that the weapon would be easy to control.

The resulting effort became the first small arm to actually earn the moniker of "submachine gun."

Though it was officially named the Thompson Submachine Gun, it was known by a number of colorful nicknames, including the Trench Broom and the Annihilator, but most famously as Tommy Gun. The Thompson never saw service in the trenches, as its prototype was only developed as the war in Europe ended.

It finally entered production in 1921 and was marketed commercially—but it wasn't exactly a hit. At $200, it cost more than a car at the time. And few civilians saw a need for a weapon that expended so much ammunition. Interestingly, some of its earliest advertisements actually marketed it as the "safest gun to shoot in city streets."

The military, which was in the process of scaling back in size, also wasn't immediately interested. The first government contract actually was from the U.S. Postal Inspection Service. However, its rapid rate of fire made it a favorite of criminals during the era of prohibition. A 1939 Time magazine article even described the Thompson as "the deadliest weapon, pound for pound, ever devised by man."

By that time the improved Model 1928 version of the Thompson submachine gun had found favor with the U.S. Army and United States Marine Corps, but it was also found to be too heavy, while its rate of fire of 1,500 rounds per minute was in a word, excess at least for military purposes. That led to the development of the Thompson M1A1, which fired a steady 600 to 700 rounds per minute. It made for a more controllable firearm, while stick magazines that held 20 or 30-rounds helped address the weight issue.

The Thompson eventually saw use in every theater of the Second World War, and was subsequently carried in the Korean War and was even used in the early stages of the Vietnam War. As the first submachine gun to be adopted by the U.S. military it proved ideal for close quarters fighting.

Today, there are semi-automatic versions available, but who wouldn't want a real one?

Vintage Thompsons do come on the market, but you'll have to live in one of the 37 states that allow residents to own a machine gun. You'll also have to pass a Bureau of Alcohol, Tobacco, and Firearms (ATF) background check and pay the associated transfer fee. Interestingly, the cost of the transfer stamp—which is a requirement of the aforementioned National Firearms Act—was set at $200, the cost of the Thompson at the time the act was passed. The good news is that the fee hasn't increased.

Unfortunately, the price of the gun has gone up considerably. Today, a fully-automatic vintage Thompson could set you back around $20,000 to $30,000, or more depending on condition and variant. It would certainly be the centerpiece in any collection.