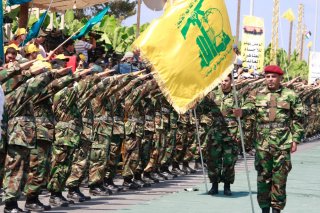 As horrible as the recent fighting in Gaza was, it’s important that the Biden administration realize that the eleven-day conflict served as a dry run for the much larger and more devastating war that Iran is planning to wage against Israel.

In terms of the terrorist “ring of fire” that Iran is now surrounding Israel with, Hamas is the minor league. Hezbollah in Lebanon is the real A-Team. At the high end of the range, it’s estimated that Hamas could possess as many as 30,000 rockets. Hezbollah’s arsenal may be up to five times larger. It could fire as many missiles at Israel in a single day as Hamas fired over the course of an entire week. And unlike Hamas, Hezbollah has a growing stockpile of long-range Iranian precision weapons (and an indigenous production capability to make more) that, in theory, could accurately strike most of Israel’s most important economic and military targets, effectively shutting the country down and making life almost unbearable for America’s most important Middle East ally.

Avoiding that catastrophic situation and the excruciating strategic challenges it would pose for the United States should clearly be a vital American interest. If U.S. officials didn’t much like the Gaza movie they just watched, they’re really going to hate the Hezbollah sequel. Doing everything in their power to help Israel deter that war and, if necessary, fight and win it as decisively as possible, should now become an urgent focus of President Joe Biden and his team.

At a minimum, that means making clear to Iran and its regional terror network that this latest conflict in Gaza has only strengthened the U.S.-Israel alliance. For sure, doing that won’t be easy in the face of the growing power of the Democratic Party’s increasingly strident progressive wing, which has been harshly critical of Israel’s policies.

But it’s essential. Biden and those embattled remnants of his party in Congress who remain faithful to the muscular internationalism championed by the likes of President Harry S. Truman and Senator Henry “Scoop” Jackson need to push back against the rising anti-Israel chorus among progressives. They’ll have the overwhelming support of their Republican colleagues if they do so, as well as the majority of average Americans who still intuitively grasp the difference between a democratic ally exercising its inherent right to self-defense and a terrorist group dedicated to its destruction. Among other things, that United States support should include an announcement from the administration on the immediate resupply and strengthening of Israel’s life-saving missile defense system, its inventory of precision-guided munitions and bunker-busting bombs, and its air power. The president’s statement last week declaring his “full support” to replenish Israel’s Iron Dome interceptor missiles was an excellent start.

But it also means that President Biden needs urgently to reassess the wisdom of his administration’s headlong rush back into the Iran nuclear deal. As surely as night follows day, a resumption of the 2015 deal—with its requirements for massive American sanctions relief—will result in tens of billions of dollars being funneled to the Islamic Revolutionary Guard Corps and their terrorist proxies not only in Hezbollah and Hamas, but among Houthi rebels in Yemen and Shiite militias in Iraq as well.

There’s no polite way to say this: Especially after the tragic scenes that we’ve just witnessed in Gaza, it would border on strategic madness for the United States to barrel ahead on a course that is virtually guaranteed to underwrite Iran’s next war against Israel and help the Revolutionary Guards and their terrorist foreign legion inflict levels of destruction on U.S. allies and interests that will make the awfulness of the recent Gaza war seem like a walk in the park by comparison.

John Hannah is Senior Fellow at the Jewish Institute for National Security of America and the former national security advisor to Vice President Dick Cheney.