Is Israel's Iron Dome Enough to Protect It From Hamas? 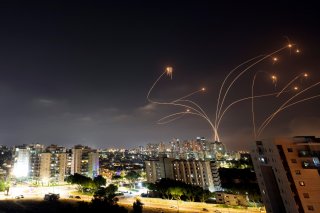 The Israeli Defense Forces (IDF) continue to exchange fire with Hamas and the Palestinian Islamic Jihad (PIJ), in what is the most serious flare-up in the Gaza conflict since 2014. As of the time of writing, 83 were killed in Gaza according to local authorities; at least seven are dead in Israel. As per the latest Israeli army intelligence estimates, Hamas and PIJ forces have fired as many as 1,600 rockets toward Israel. A great swathe of these were aimed at towns in southern and coastal Israel, though the Jerusalem area was also targeted. The IDF announced earlier today that it struck as many as 600 targets in the Gaza Strip, including Hamas commanders and rocket production facilities. The conflict shows no signs of abating, with neither side signaling a desire for de-escalation.  “We have much more to give,” said Hamas spokesman Abu Obaida. “The decision to hit Tel Aviv, Dimona and Jerusalem is easier for us than drinking water. Your technology and assassinations don't scare us.”

The Soviet-derived BM-21 Grad rocket launcher makes up a large chunk of Hamas’s rocket force in the Gaza strip, but they also have the more capable M-302 family of unguided artillery rockets, a Syrian-made derivative of the Chinese WS-1 rocket. Israel’s primary line of defense against the barrage of short-range rockets coming from Gaza is its Iron Dome system-- an interceptor network that employs sophisticated radar analysis to identify, track, and destroy incoming rockets that threaten civilian populations or critical infrastructure.

How has the Iron Dome, often touted as one of the world’s most effective interceptor systems, performed thus far? Partly as a cost-saving measure, the system only tries to intercept rockets that are on a trajectory to hit populated areas. This is especially prudent in the context of the current conflict because, of the 1,600 rockets fired by Hamas, around 400 failed to reach Israeli territory and would not have needed to be intercepted in the first place. Of the rockets that do merit interception, the IDF has long maintained that the Iron Dome enjoys a success rate of over 90%. This figure has been critically interrogated in recent years, notably in an insightful 2019 National Interest analysis written by Brock University associate professor Michael Armstrong. But, even if accurate as an aggregate number, there is data and precedent to suggest that the Iron Dome is markedly less effective against very short-distance saturation strikes. During the 2014 Gaza conflict, Iron Dome batteries struggled to intercept all of the nearly 700 short-range rockets fired at Israel over the span of one weekend. Not only have Hamas and PIJ saturation strike capabilities grown since 2014, but they have consistently adapted their tactics to fire rockets at low trajectories for a better chance at penetrating the IDF’s missile defense network.

Each Iron Dome launcher can carry twenty Tamir interceptors, and there are believed to be three to four launchers in a typical Iron Dome battery. It is unclear precisely how many batteries are operational, though that number is currently no fewer than ten. Given a sufficient output of rockets fired at a specific location within a short enough time frame, it is entirely possible that Hamas/PIJ forces could overwhelm the Iron Dome network and inflict substantial casualties on critical infrastructure and/or highly populated areas. Adding more Iron Dome batteries can mitigate this potential vulnerability in the short term, but Hamas/PIJ could respond simply by acquiring even more missiles in turn.

This is not so much a weakness specific to the Iron Dome as it is a reflection of the fact that no conventional missile defense system, however advanced, is fully immune against swarm techniques. Jerusalem has recently invested in Iron Beam, a laser air defense system that promises to shore up the Iron Dome’s limitations, but it is too early to fully assess the Beam’s battlefield effectiveness.