Israel's Iron Dome: Just How Good Is It At Killing Rockets? 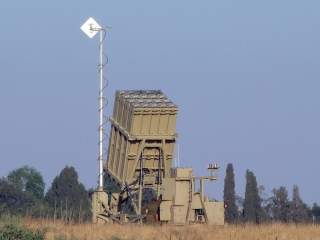 On May 4 and 5, Gaza Strip militants fired more than 690 rockets and mortar shells at Israel. The attacks killed three civilians and wounded 130, making Israel’s news media ask whether the country’s Iron Dome interceptors had lost their effectiveness. On the contrary, the available data suggest the interceptors performed well. But they also imply Israelis should reassess how much protection to expect during future conflicts.

It’s not surprising the barrage worried observers. The two-day attack involved nearly as many projectiles and civilians casualties as had the twenty-three-day Operation Cast Lead in 2008. Gaza militants even boasted of successfully overwhelming some interceptor batteries by concentrating their rockets into large salvos.

But the Israeli Defense Force (IDF) claimed its own successes, saying its batteries achieved an 86 percent interception rate against engaged projectiles. Overall, the IDF intercepted some 240 (35 percent) of all rockets and shells, allowing just 35 projectiles (5 percent) to hit populated areas. The remaining 415 (60 percent) fell in rural areas.

The city of Ashdod provides an example of both viewpoints. From 7 p.m. to 8 p.m. on May 5, some 117 rockets were fired toward it. Assuming about 60 percent headed toward open areas, the defending battery would’ve focused on the remaining 40 percent, or about 47 rockets. If those rockets had arrived all simultaneously, stopping them would’ve been almost impossible. But if they were spread out over the hour, intercepting them would’ve been far easier.

The reality seems closer to the latter case, as only one rocket survived to hit the city. Unfortunately, that was enough to kill a man, a dual American-Israeli citizen, as he ran towards shelter.

More generally, shooting down 35 percent of all projectiles is impressive. It’s notably better than the 31 percent achieved during 2012’s Operation Pillar of Defense and the 16 percent of 2014’s Operation Protective Edge. The higher percentage is partly attributable to the militants deliberately firing near batteries, rather than avoiding them. It presumably also reflects recent technological improvements that helped Iron Dome intercept hard-to-hit mortar shells.

The 86 percent interception rate is also respectable. It’s comparable to Pillar of Defense’s 85 percent rate and only slightly lower than Protective Edge’s 90 percent.

The fact that rate remained high suggests militants’ salvo tactics weren’t as successful as claimed. But the fact it dropped slightly also suggests a few extra rockets did slip past the interceptors.

Even a few would make a difference. The 4-point drop in interception rate means a 4-point increase in penetration rate, from 10 to 14 percent. That’s 40 percent more rockets hitting populated areas. This is the irony of strong interception systems: even slight drops in effectiveness trigger substantially larger losses.

It is from this casualty perspective that the Israeli defense disappointed. When measured on a per-rocket basis, the conflict’s death rate and injury rate were roughly five times greater than those of 2014. They more closely resembled the higher rates of 2012.

That regression to higher casualty rates appears unrelated to the interceptors themselves, as a larger proportion of rockets was shot down. Militants’ firing tactics seemingly did boost loss rates by about 40 percent, but not by a factor of five.

The rest of the casualty rate increase instead seems due to the higher lethality of the few projectiles that penetrated Israel’s defenses. In part, that might reflect increasing average rocket sizes. One extreme example is Palestinian Islamic Jihad’s new rocket that has a limited range but a massive 250 kg warhead.

The increased lethality per hit might also be due to differences in civilian behavior. For example, the extended durations of the 2008, 2012, and 2014 operations let Israelis adjust their routines to reduce their risks. By contrast, the recent brief conflict might have caught civilians still operating in “peacetime” mode. Some might not have followed Israeli Home Defense instructions, perhaps relying too much on Iron Dome’s protection.

That perhaps is the larger lesson here: no missile defense system is perfectly reliable, especially against an evolving threat. Israel constantly improves its interceptors, as evidenced by its falling loss rates between 2012 and 2014. But Gaza likewise pursues ways to overcome those defenses. That can include new rocket designs and tactics, plus tools like incendiary balloons that bypass Iron Dome completely.

This lesson is not limited to the Israel-Gaza conflict. The U.S. Army is buying two Iron Dome systems and apparently, the U.S. Marine Corps also seems interested. Similar limitations apply to defenses against other missile threats, including those posed by North Korea and China.