General Dynamics’ StrykerX Is Bringing Drones and Lasers to the Battlefield 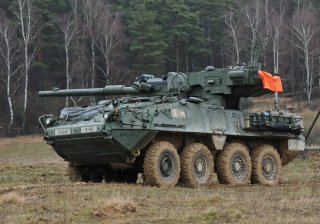 The emerging StrykerX infantry carrier is set to offer unprecedented capabilities to U.S. warfighters, including the ability to deliver armed soldiers into hostile enemy fire with added battlefield awareness, conduct silent reconnaissance without generating an acoustic or thermal signature, or fire air burst rounds from a 30mm cannon with long-range precision targeting.

General Dynamics Lab Systems (GDLS), the maker of the Army’s Stryker vehicle, has just unveiled a new, high-tech StrykerX demonstrator that is engineered with a series of cutting-edge, new innovations. Indeed, the StrykerX will be able to launch attack drones, fire lasers, conduct electronic warfare operations, and offer “silent watch” capabilities (an ability to operate sensors and weapons without emitting an acoustic or thermal signature) with a hybrid-electric engine.

“It's our attempt to put new technology onto the fleet. You know the Strykers are out there in great numbers. We're producing the DVH [Stryker Double V-Hull] model today, so this would be something new to the Army. If they choose to go for it, it's a hybrid electric engine. Unlike the tank, the vehicle is driven purely by electrical power, the diesel engine is only there to generate electricity into the motor, which then drives all the axles. You get a fair amount of silent move capability, not just a few minutes, but a good period of time,” Tim Reece, director of US Business Development at GDLS, told The National Interest in an interview.

Given the number of variants of the Stryker vehicle, such as a reconnaissance vehicle, infantry carrier, and medical evacuation platform, an ability to implement a “silent watch” capability would introduce a wide range of significant tactical advantages.

“There is more than a day’s worth of silent watch capability out of the battery pack without having to turn on your engine. You also get to reconfigure the crew a little bit, instead of having a driver forward in what all the soldiers referred to as the hellhole. The driver and the commander now sit side by side in a cockpit arrangement more like a helicopter or a jet aircraft, sharing a series of screens in front of them so they can function together better,” Keith Barclay, director of Strategy & Growth at GDLS, told The National Interest.

The StrykerX also includes more room in the back for an infantry squad and the ability to connect the crew with all sensors.

“Soldiers have that see-through armor effect that you read about all the time, and much better situational awareness as they're bouncing around in the back of that vehicle heading towards their objective,” Barclay said.