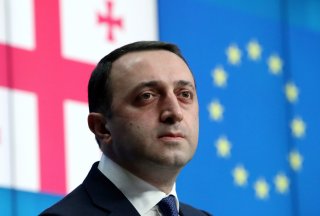 Georgian prime minister Irakli Gharibashvili announced on Tuesday that he had finished and submitted the first part of the European Union’s membership questionnaire—the first step in any nation’s accession process into the EU.

“Proud to have handed the Questionnaire to the Ambassador to [Georgia] Carl Hartzell,” Gharibashvili wrote on Twitter, referring to the European Union’s Ambassador to Georgia. “Thus, we have stepped into the paramount stage of our country’s [EU] integration path.”

“I am sure of [Georgia]’s success … in pursuit of the ultimate goal of the Georgian people,” the prime minister continued.

In the coming weeks, the questionnaire will be submitted to the European Commission, which will review it and evaluate whether to grant “candidate status” to Georgia. A decision on the matter will likely be published by the end of June.

In remarks before the document’s submission, Gharibashvili expressed gratitude to the Georgian officials who had helped to complete it.

“I want to thank again everyone who was involved in this process,” he said. “It was a time-consuming job, but we completed it successfully.”

An EU membership questionnaire is intended to assess the readiness of a given country for membership according to the “Copenhagen criteria,” which consists of three major areas: political stability and commitment to democracy, free-market economic institutions, and the willingness to adopt EU-wide institutions such as the euro and the Schengen visa-free area. The questionnaire contains thousands of questions of varying complexity evaluating the country’s adherence to existing EU laws. The first section of the questionnaire, consisting of 369 questions across forty-two pages, has been made public.

Although the questionnaire process is nominally expected to take three months, the European Commission has stated that “it is not uncommon to have subsequent exchanges and follow up questions until all information received from the applicant country is deemed satisfactory.”

A former Soviet republic, Georgia has cautiously sought closer ties with Europe since the resignation of pro-Russian leader Eduard Shevardnadze during the “Rose Revolution” of November 2003. The removal of Shevardnadze and Georgia’s subsequent pursuit of EU integration has led to growing tensions with Russia, which invaded Georgia in 2008 to secure the independence of two pro-Russian separatist regions, Abkhazia and South Ossetia, in the northern part of the country. Georgia’s renewed push for EU membership has been connected by many observers to the Russian invasion of Ukraine on February 24, which was met with near-universal condemnation among the Georgian public.