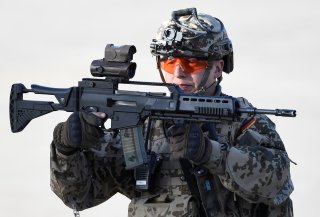 For nearly six decades the German Bundeswehr has turned to Heckler & Koch for its primary small arms. Germany’s army and its leading arms manufacturer have had such a close relationship that it came almost as a shock that the Bundeswehr opted to adopt C.G. Haenel MK556 as its new assault rifle.

But all good things come to an end, and this marks the first time since 1956 that the “no compromise” gun manufacturer won’t be the arming the German Federal Army. Its first weapon was the G3 battle rifle, which was based on the Spanish CETME rifle. Introduced in 1956, the contract with the Bundeswehr allowed H&K to transform into one of the world’s most successful military small arms suppliers in the world.

The C. G. Haenal developed MK556, which features a short-stroke pistol design, beat out the new H&K HK433, which was developed specifically for consideration after Berlin announced that the existing HK416 was too expensive for general use. It was however adopted by the Kommando Spezialkräfte (Special Forces).

Haenel is already supplying the Bundeswehr with its RS9 sniper rifle—designated as the G29 in German military service.

“This announcement comes as a surprise considering Heckler & Koch’s (H&K) historically leading position in the German light arms market, as well as its global successes, which, among others, include the recent HK416 contracts with France and Norway where it serves as the main rifle,” said Stelios Kanavakis, defense analyst at GlobalData, a leading data and analytics company, via an email to the National Interest.

“Once the contract is approved by the German Parliament, the German Armed Forces will acquire 120,000 rifles at a cost of $296m,” Kanavakis added.

Despite being in service since 1997 the upgraded G36 was not without problems. Unlike previous Heckler and Koch designs adopted by the German government that used the G3's roller locked, delayed blowback system—including the G3, MP5 submachine gun, and MSG-90 sniper rifle—the G36 utilized the more widely used gas-operated, rotating bolt system instead.

The G36 was by all accounts an excellent peacetime weapon, gathering relatively few complaints. However, after 9/11, the German army deployed for the first time outside Europe since World War II into an active combat zone. It was during fighting in Afghanistan that the G36 proved problematic. The gun was prone to overheating.

The German military began to search for a replacement in 2017.

“The decision is also a blow to the H&K G36 rifle, which allegedly suffered from overheating and accuracy problems during operations in hot climates or after extensive firing, something that led the then defence minister, Ursula von der Leyen, to order a new tender,” explained Kanavakis. “That will also have a negative impact on H&K’s ability to promote its weapons and it may also lead current users of the G36, such as Spain, to select a new main assault rifle sometime in the near-future.”

End of the Line for H&K

The selection of the MK556 thus marks the end of one of the Bundeswehr’s longest relationships with an arms maker.

“It is noteworthy that the German state side-lined after sixty years its long-term supplier for another German company that is nevertheless owned by UAE’s EDGE Group,” added Kanavakis. “The latter produces Caracal’s CAR 816 assault rifle, which has its roots in the HK416, as some of H&K’s and Sig Sauer’s engineers were hired by the UAE conglomerate to design the new product. CAR 816 has already been selected by India and South Korea, among others. The recent success is marking the rifle’s entry into NATO’s demanding market landscape and can open up new opportunities for EDGE Group and C.G. Haenel.”