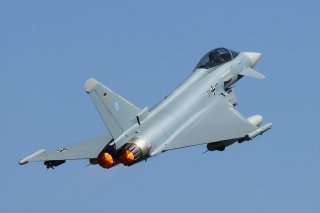 During World War II, the German Luftwaffe developed the only rocket-powered fighter ever to have been in operation with its Messerschmitt Me 163 Komet. Now, nearly eight decades later, the modern Luftwaffe has successfully completed tests of the Meteor, an air-to-air missile that will be used with the domestic Eurofighter Typhoon.

The Air Force Times shared a video of the tests, which were completed in June, on Monday.

The Luftwaffe’s Tactical Air Wing 74 successfully completed the initial tests of the Meteor from aircraft operating out of Neuberg Air Base in Bavaria. Two jets were reported to have been involved in the exercise while German officials monitored the flights and obtained data, which would be used to determine aircraft performance.

A live-fire test has still yet to take place. Although an exact date hasn't been announced, it will likely be later this year.

The Meteor is an active radar-guided beyond-visual-range air-to-air missile (BVRAAM), which was developed by MBDA, a multinational developer and manufacturer of missile technology. The company was founded in December 2001 as a joint venture of the guided-missile divisions of EADS (now Airbus), Finmeccanica (currently operating as Leonardo) and BAE Systems. The joint program included NATO member nations Germany, France, Spain, Italy and the United Kingdom, as well as NATO partner nation (but not actual alliance member) Sweden.

The missile is notable in that it offers a multi-shot capability, with multiple launches against multiple targets, while it also has the ability to engage highly maneuverable targets including agile, fast-moving jets, but also smaller targets such as cruise missiles in a heavy electronic countermeasures (ECM) environment. It can also target unmanned aerial vehicles and other drones, while the Meteor has a range in excess of one hundred kilometers. The missile is guided by an advanced active radar seeker, enabling the Meteor to provide an all-weather capability to engage those targets, while it is also equipped with a data link communication. It can be operated by utilizing third-party data, providing the pilot with a flexible weapon system.

The Meteor is about twelve feet in length and weighs just under four hundred pounds. It features a ramjet air-breathing engine, which allows the missile to adjust its velocity based on its target’s maneuvers.

Defense News reported that the German pilot, a major in the Luftwaffe, said that the German military will incorporate four Meteor missiles systems will be tested alongside two of the already in-service AIM-120 advanced medium-range air-to-air missiles as well as two also in service Infra-Red Imaging System-Tail short-range missiles. The flights were reported to be critical for the Luftwaffe to study and determine what effects the Meteor would have on fuel consumption as well flight behavior of the Eurofighter Typhoon.

“Imagine you are driving your car with a roof rack attached. You will first notice that the air resistance increases and with it the consumption of your car,” the unnamed pilot said in a statement provided by the service. “And we calculated exactly such consumption values in advance in simulations with our mission planning software and checked them with the flight tests.”

The Meteor will be integrated on all of Germany’s Eurofighter Typhoon aircraft, except for the oldest Tranche-1 models, according to Defense News.