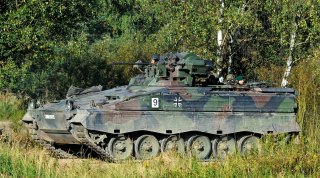 Germany’s Marder Infantry Fighting Vehicles are not young. In fact, 2021 marked fifty years since the first Cold War-era IFVs rolled off assembly lines. But despite their age, they’re getting a big makeover that could see them stay in service for years to come.

West Germany’s Schützenpanzer Lang HS.30 provided the impetus for the Marder’s design. The HS.30 was well-protected but problematic when it was introduced early in the Cold War. The vehicle was considered unreliable from the outset: Tracks rapidly wore out, transmissions often failed, and soldiers could not easily remove the vehicle’s engine for field maintenance. Top speed was also an issue.

Most problematic, however, was ingress and egress for troops inside. Unlike most infantry vehicles which featured a door at the rear, the infantry access point on the HS.30 was via two roof hatches. Disembarking soldiers were badly exposed to enemy fire. They also had to contend with the vehicle’s tracks and jump wide away.

The German Bundeswehr is essentially gutting their Marders with multiple new components. They’ll receive a new six-cylinder, seven hundred and fifty horsepower engine, significantly increasing power from the original five hundred and ninety-one horsepower diesel engine. In order to cope with the additional engine power, the Marder’s transmission will be strengthened and partially digitized.

In addition, the old beast will incorporate new tracks taken from the Puma, an armored fighting vehicle also in service with the Bundeswehr.

According to German reports, a new “visual system has also already been integrated into the Marder 1A5A1,” as well, combining “an optical image with that of a thermal imaging camera” and a rearview camera for the Marder’s driver.

Perhaps most significantly, seventy of Germany’s Marders are also slated to receive MELLS anti-tank guided missiles (ATGMs). The MELLS ATGM is similar to Israel’s Spike ATGM, which can engage armored targets at distances of 2.5 or 3.4 miles, contingent upon the Spike variant.

Though this most recent upgrade package will keep the Marder in service with the German Bundeswehr somewhat longer, the fact remains that the platform is among the first post-World War II infantry fighting vehicle designs and simply not getting any younger.

Still, the vehicle could stay in service even longer with some other countries that purchased the Marder design. Jordan, Chile, and Indonesia all operate variants of the Marder vehicle. So it seems this Cold War classic still has life in it.