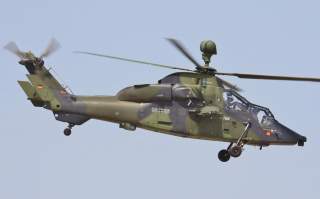 Just a handful of the German military’s new attack and transport helicopters reportedly were combat-ready in November 2019, prolonging a deep readiness crisis in Berlin’s armed forces.

Local media reported that just eight of the German army’s 53 Tiger attack helicopters and 12 of the service’s 99 NH-90 transports were war-ready.

A military branch typically aims to ensure that as much as 80 percent of its major hardware at any given time is ready for combat. U.S. military fighter squadrons usually try to maintain an 80-percent readiness rate.

For highly complex weapons systems, lower readiness rates generally are acceptable. The U.S. Navy plans to deploy six of its 11 carriers within 30 days of a crisis, plus a seventh within 90 days. The U.S. Air Force, for example, seems content to be able to deploy on short notice just half of its 20 B-2 stealth bombers.

German army helicopter readiness by contrast reportedly hovers at around 15 percent. Low readiness doesn’t only mean fewer helicopters for operations. It also impacts manpower. “The catastrophic operational readiness of the Tiger now also affects the training of the pilots,” Tobias Lindner, a politician with Germany’s Green Party, told Bild. “This state of affairs is irresponsible.”

Readiness disasters are perennial news in Germany. In mid-2018 just 10 of the German air force’s then 128 Eurofighter Typhoons were mission-ready, local media reported. At the same time, only 26 of the air force’s 93 Tornado fighter-bombers were ready.

The shortage of Typhoons and Tornadoes made it impossible for the German air force to meet its obligation to NATO to maintain 82 fighters in a high state of readiness for a sudden crisis. “The Luftwaffe is at a low point,” admitted Lt. Gen. Ingo Gerhartz, then the new chief of staff of the air force.

The problem extended across the German armed forces. According to a 2018 report to the German parliament, only 16 of 72 CH-53 transport helicopters, three of 15 A400 airlifters, 105 of 224 Leopard 2 tanks, and five of 13 frigates were ready.

Most catastrophically, none of the German navy’s six submarines were capable of deploying. One of Type 212 diesel-electric boats had suffered a minor accident. Three were in shipyards for long-term maintenance and two were tied up in port for less intensive repairs.

Navy officials blamed a shortage of spare parts. “While a comprehensive package of spare parts was a key aspect of any new acquisition during the Cold War, cost-saving measures adopted since then have resulted in parts no longer being kept in reserve,” Defense News reported, citing a navy official’s comments to local media.

German chancellor Angela Merkel in mid-2019 pledged slowly to increase the percentage of national gross domestic product that Germany spends on its armed forces. Merkel said that by the early 2030s Germany would meet NATO’s two-percent-GDP spending goal for its member states.

Incredibly, the German air force plans to acquire scores of new warplanes even as it fails to maintain the planes it already has.

The German air force just received the last Eurofighter Typhoon fighter from its initial order for 143 of the planes. But many more new Typhoons could be in the air arm’s future as it eyes replacements for older planes.

The German air force in late 2019 operated 141 surviving Typhoons plus 74 Tornado fighter-bombers and 30 Tornado ECRs, the latter equipped with special weapons and sensors for the dangerous suppression-of-enemy-air-defenses, or SEAD, mission.

The 1980s-vintage Tornados are up for replacement. Versions of the Typhoon could fit the bill. And new Typhoons might also replace some of the older Typhoons in German service. If Berlin orders new Typhoons for all possible requirements, the German air force in a decade or so could operate more than 250 Typhoons.

But if current readiness rates hold, just a couple of dozen of the fighters might be ready for combat.