Get Ready for the Future Long Range Assault Aircraft 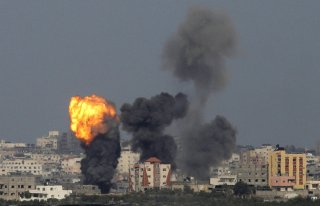 Utility helicopters delivering infantry under heavy enemy fire in 2030 will need new levels of speed, maneuverability and agility to succeed in an entirely new sphere of high-speed combat intensity.

Such is the premise of the now evolving Future Long-Range Assault Aircraft, a now-in-development Black Hawk-like aircraft for the 2030s intended to heavily impact, if not change, the maneuverability paradigm for utility helicopters moving into the future. Air Assault raids, for example, will likely be of an entirely different character in ten years, something which continues to inform the developmental trajectory of two competing aircraft, Bell’s V-280 Valor and Lockheed-Sikorsky-Boeing’s DEFIANT X.

Many of the now airborne innovations necessary to achieve previously unimagined speeds and maneuverability are the result of years of innovation and technological experimentation. For example, Lockheed-Sikorsky-Boeing engineers, builders and weapons developers of the DEFIANT X have found a way to massively decrease or even remove what’s called “Retreating Blade Stall,” by building rigid, counter-rotating rotor blades.

The rigid rotor blades, Macklin explained, are engineered to mitigate pockets of instability in the air called “blade stall” which could otherwise destabilize flight trajectory, adding new dimensions of agility such that the aircraft can more quickly arrive at a combat objective, stop, unload infantry and then get out.

“We have done a significant amount of ground system testing and wind tunnel testing. We understand that maneuverability and agility are crucial to mission success as well as survivability on the battlefield,” Jay Macklin, Sikorsky business development director, Future Vertical Lift, told The National Interest in an interview.

Macklin further elaborated upon some of the technical innovations by explaining how a coaxial rotor system spins its upper and lower blades in opposite directions such that there is not a “retreating side” creating a flight imbalance.

The retreating blade side is referred to in a Lockheed-Sikorsky-Boeing paper as a “reverse velocity region” which “cannot produce lift,” especially at higher speeds. Offsetting this potential instability, therefore, can help enable and sustain much higher speeds without compromising or losing flight stability.

“In a traditional helicopter, as you move through the air the lift across the rotor disc becomes uneven based on the relative wind created by your forward speed. As you accelerate the “advancing blade” (on the right side of the helicopter) feels more relative wind than the “retreating blade.” To account for this imbalance the retreating blades must increase their pitch angle so that the lift is equal on the right and left sides of the helicopter. At some point, this pitch angle becomes so great that the blade stalls (stops producing lift)—hence the name, “retreating blade stall,” Macklin said.

Part of these new approaches to speed and maneuverability include a focus on yet another element of the Army’s sought-after requirements for the aircraft, an ability to operate in much more difficult “high-hot” conditions, meaning 95-degrees Fahrenheit and 6,000 feet where thinner air can challenge helicopter operations. Yet another element of technological focus, something fundamental to speed, maneuverability and overall operational effectiveness, is the need to achieve and sustain lift. Lockheed-Sikorsky-Boeing data on the DEFIANT X says that their aircraft can handle additional weight without having to grow the rotor diameter or the engine size. So, any additional equipment, survivability features, payload (including external lift) can be handled without a significant and costly redesign of key dynamic components. The DEFIANT X can sling load a 155-millimeter Howitzer mobile artillery cannon.

“Our compound coaxial rigid rotor systems have a tremendous amount of lift capability. We can pick up quite a bit of weight,” Macklin said.