Get Ready: The Royal Navy’s New Frigates Are Coming 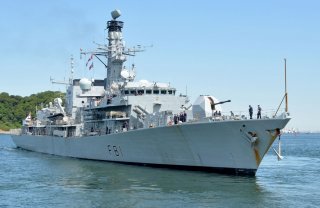 The class is also known as the Inspiration-class, and they take their names from former Royal Navy ships or submarines. For example, the HMS Venturer takes its name from a British submarine of the same name that became the first submarine to sink an enemy submarine underwater during World War II.

The British Second Sea Lord, Vice Admiral Nick Hine, elaborated on his feelings on the Type 31 class, saying that “this is an exciting time for the Royal Navy. The Type 31 represents the very best of British shipbuilding and with its modular design will be configurable to meet the needs of both the Royal Navy and our allies around the world, now and into the future.”

Furthermore, the Type 31s “will operate across the globe with sustained forward presence, further signifying our intent of being a global navy and the foremost naval power in Europe.”

In addition to two dozen Vertical Launch Cells holding Sea Ceptor air defense missiles, the Inspiration-class frigates will be armed with a single 57mm naval gun and a pair of 40mm secondary guns.

The class is based on the Danish Iver Huitfeldt-class, and though undoubtedly capable, the frigates are “much less high-end” than some of the Royal Navy’s other ships. Nevertheless, the ships offer more capabilities than small riverboats, though they are perhaps less survivable than the Royal Navy’s Type 45 destroyers.

Nevertheless, one Royal Navy Admiral explained that the class is “still a complex warship, and it is still able to protect and defend and to exert influence around the world,” but with a focus on lower construction and program costs through the use of off-the-shelf technology.

Rather than going head to head against a near-peer naval force, the Type 31 frigates would instead be tasked with maritime patrol, humanitarian and disaster relief, anti-piracy operations, and convoy escort.

The British expected the Type 31 fleet to be delivered by 2028 in its entirety and later enter service in 2030, with the first of the class to ride the waves relatively soon in 2023. Still, the Royal Navy is relatively small. By the middle of the 2020s, the British sailing branch is expected to number a paltry sixteen or seventeen active service hulls.