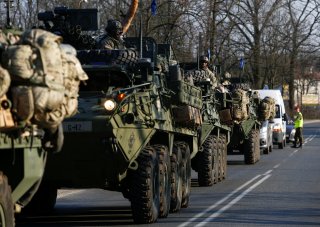 The Global Posture Review, the Pentagon’s analysis of worldwide deployments of U.S. forces, has made only incremental changes from the global positioning of troops by the Trump administration. In certain regions of the world—Europe and East and West Africa—the Biden administration is likely to reverse Trump’s troop reductions. In addition, Biden will advance his well-publicized resumption of the Obama administration’s “pivot to [East] Asia” by ending U.S. troop deployments in Afghanistan and Iraq while building up bases, forces, and alliances in East Asia. Yet the number of forces in even this latter shift is incremental in nature, with improvements in airfields in the Asia-Pacific region and a new partnership between the United States, Australia, and Britain to counter a rising China.

In short, a nation with a staggering $29 trillion in debt is still trying to continue playing the role of global policeman as it did during the Cold War and immediate post-Cold War eras. As an indicator of current American hegemonic overstretch, the United States accounts for 39 percent of the world’s defense spending but less than 16 percent of global GDP. The United States currently spends what the next twelve countries combined spend on “defense,” which really means funding for U.S. forces to project power around the world and continue this policing role.

Despite its slight reduction of forces in Afghanistan and Iraq, the United States will continue its heavy naval presence in the Persian Gulf region. Also, the Biden administration is waffling on continuing Trump’s plan to withdraw U.S. forces from Somalia in East Africa and has promised France that it will help with counterterrorism in West Africa, perhaps sending more U.S. aircraft and drones to that region. Troops will be incrementally increased, rather than reduced, in Europe.

Throughout history, many empires have fallen, or at least were compelled to retract, because of similar overstretch. It would be wise for future Global Posture Reviews to honestly deal with such overstretch, but the Defense Department, always after bigger budgets no matter the existing security threats to the United States, has an incentive to do little else but demand more money to make the military burden on the U.S. economy even greater.

Theoretically, because the nation’s founders stipulated in the Constitution that Congress had the power to declare war, the legislature should also give advanced approval of any deployments of U.S. forces abroad. In even the first war after the nation’s founding—the undeclared Quasi-War against U.S. ally France—Congress carefully regulated deployments of and rules of engagement for U.S. forces. However, the imperial presidency now boldly claims sole jurisdiction over the deployment of U.S. forces worldwide and bridles at any congressional interference in this vital function.

Yet the founders envisioned the president’s role as commander-in-chief narrowly. The chief executive would merely execute Congress’s will in foreign policy and war, just as he or she did with legislation at home. The reason for the limited commander-in-chief role given to the president was that the founders, having recently parted with a king, believed no one person should be able to take actions that might embroil the country in war. However, throughout American history, presidents have essentially nullified the power of Congress to make decisions of war and peace by repeatedly and unilaterally making provocative deployments of U.S. forces that were instrumental in triggering wars. This can be seen in the run-up to the Mexican War, the Civil War, the Vietnam War, and the Gulf War.

Because Congress is often reluctant to cut off funding after the fact when American forces are already under fire, Congress exercising its war powers by merely approving money for war is not enough. Congress must not only reclaim its war powers by demanding the right to declare war in advance of hostilities. It must assert its right to approve any U.S. force deployments abroad as it did at the beginning of the republic’s history. Allowing the executive to merely report to Congress in the Global Posture Review where he or she has decided to deploy troops in the world will relinquish Congress’ constitutionally given power to make decisions of war and peace.