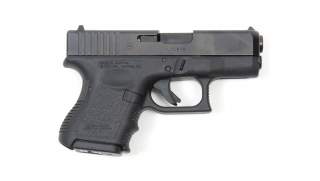 Key Point: We have some answers.

A couple days ago my father-in-law and I met with one of his old friends at his personal shooting range. He showed us his collection — among which is a Chinese-made AK-47 clone (the brand is called Norinco), a Rock Island Armory 1911-style pistol chambered in .22 TCM, a Glock 26 Gen4 and an obscure semi-auto pistol that looked so beaten up I didn’t bother checking it out.

What caught my attention was his newest acquisition: a subcompact S&W M&P9 , which he said was the second generation of the M&P line of pistols from Smith & Wesson. I was like wow, it looks like a Glock and it also has “generations” — just another Glock rip-off!

In the past I’ve been very vocal about how I don’t like plastic guns. I was brought up shooting only all-steel 1911s and revolvers and I just don’t like them, so I don’t think there’s anything special about this Glock clone.

Also, while I love S&W magnum revolvers (specifically the pre-lock ones) and I’m a huge fan of Jerry Miculek, I don’t like Smith & Wesson as a firearms manufacturer company — and I don’t think I have to explain why as it’s common knowledge (at least among gun rights advocates). So why am I even writing this article?

I think Glocks are ugly, and this Glock-ish clone from Smith & Wesson isn’t a beauty queen either — it does look a bit more proportional compared to the Glock 26, but an officer-size 1911 is just miles away from both in the aesthetics department. I just don’t like plastic guns in general.

This isn’t something I should be busying myself with.

Well, I’m writing this because my father-in-law and that friend of his had an hour-long argument over which pistol is better, the former swears by the M&P9 M2.0 because he thinks it’s easier to conceal and has, among other things, better ergonomics (and like me he doesn’t like Glocks too).

His friend thinks the M&P M2.0 is a great acquisition but Glocks are the be-all and end-all of plastic handguns being they were they were the first (he obviously hasn’t heard of the H&K VP70 but technically he’s right — Glock made plastic handguns the phenomenon that they are today), which makes Glock the authority. That, and Glocks are reliable and perfect, etc.

Whatever one argued, the other had a counter-argument to. Needless to say, they got nowhere.

I’m hoping that by doing research and giving them (and our readers who might be considering getting either of these two pistols as a CCW piece) a non-biased handgun enthusiast’s perspective (I don’t like both, which makes me non-biased), I could help out a little.

Get Deals on Guns and Tactical Gear

Join 70,000 Readers For Our Weekly Discounts

If you went through all the figures on the table above you probably noticed that the bore axis measurement for the M&P9 is missing. That’s because I searched everywhere online, even talked to a certain Wayne from Smith & Wesson’s customer service, but I got nothing. More on this later. 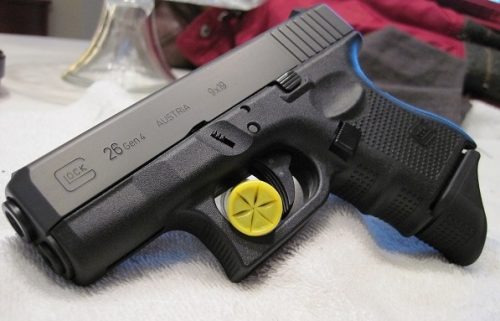 A year later, both pistols were introduced in the US and they’ve become some of the most popular plastic guns on the market since.

All Glock subcompacts share the same defining physical attribute: they have a short fat grip and a short slide, i.e. they’re all ugly as sin (to me at least). Other than their appearance, they work pretty much like their bigger compact and full-size brothers — they’re all reliable.

And that Glock pistols are reliable is a gross understatement — as discussed in all the previous rounds of our series of these Handgun Showdown write-ups, they’ve been tortured to hell and back, and back to hell and back. They never stop working. 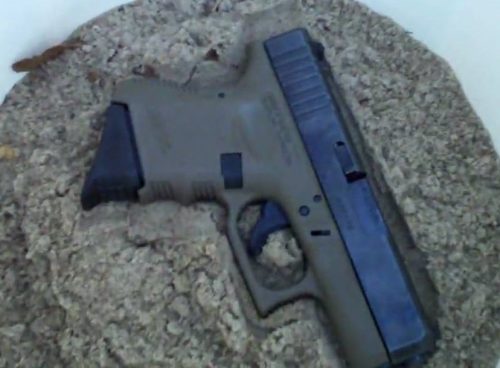 The Glock 26 is no exception. Just skim through these Google results and you’ll see why, and while you’re at it, maybe you’d want to read what this guy did to his. I mean I’d sooner drive a bulldozer over my 1911 — we all know what saltwater does to metal.

I don’t like Glocks as far as aesthetics and I’ve said that a number of times before, but I can understand why there are people who love them so much. It’s because of their legendary reliability.

I personally wouldn’t hesitate to buy one and carry it on my person if I didn’t have my trusty custom 1911 EDC — then again I don’t really like the 9mm that much either so I’d really go for something like a Para Ordnance Warthog in .45 ACP. 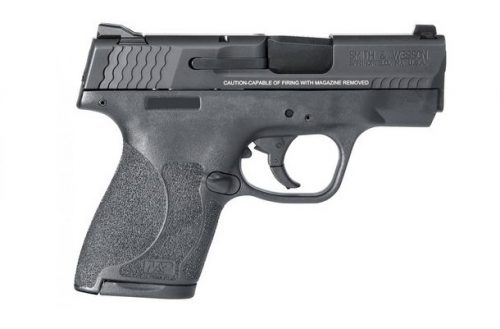 It was in 2012 when Smith & Wesson introduced the first of their M&P Shield line of plastic handguns and it really gave all their plastic-handgun-manufacturing competitors (the biggest of which being Glock) a run for their money.

In the next three years they would produce more than a million of these pistols. Who knows how many more of these were produced fast forward three more years to today? And there’s one good reason for the M&P Shield’s rise in popularity: it screams value through and through.

While these weren’t nearly as reliable as Glocks as these guys from the Military Arms Channel on YouTube demonstrated from their routine torture tests of sorts, the M&P Shield offered better sights (any factory steel sights on a handgun is better than Glock’s plastic sights in my opinion), better ergonomics and a rather intrusive but newbie-friendly loaded chamber indicator, among other things.

These features along with the more modest price might have mitigated the reliability bit and made the Shield M&P pistols a great alternative to Glocks.

And similarly, M&P pistols also have a low bore axis — the exact measurement for which I unfortunately can’t find anywhere so again, more on this later. And being inspired by Glocks these are also lighter compared to all-steel handguns because of the polymer frame.

But like most any other firearm, the first generation of the M&P Shield line of pistols had issues which, if you’re here to do research, I unfortunately won’t cover as it’s beyond the scope of this article. If you’re so inclined, you can get info on some of those issues from here.

With all the problems ironed out, the newer M2.0 version of all M&P Shield pistols are now an even bigger contender in the huge plastic pistols market.

But with all the things it has going for it, is Smith & Wesson’s subcompact plastic pistol any better compared to Glock’s? We’ll know by comparing them on some key areas.

This means that when trying to conceal either pistol, the Glock 26 Gen4 will not print as bad as the M&P9 M2.0.

Typically, a handgun with a shorter grip conceals easier but has two main downsides: it has less ammo capacity and it can be difficult to shoot comfortably and accurately because it can be tougher to hold on to when shooting.