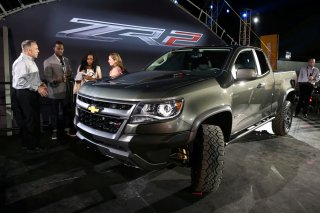 In a press release, GM Defense announced that the U.S. Army Contracting Command—Detroit Arsenal awarded the company a $214.3 million contract for their Infantry Squad Vehicle. The initial order covers the first 650 units, which GM Defense plans to deliver later this year, though the Army will eventually order a total of 2,065 ISVs.

“Winning this Army award is well-deserved recognition for the hard work and dedication of our GM Defense team and their production of a fantastic vehicle. We are confident the GMD ISV will meet and exceed all of our customers’ requirements,” said David Albritton, the President of GM Defense. “It’s indeed an honor to leverage our parent company’s experience as one of the world’s largest automotive manufacturers to design, build and deliver the best technologies available to the men and women of the U.S. Armed Forces and our allies.”

Though not heavily armored, the GM’s ISV is intended to quickly ferry Army soldiers around the battlefield, similarly to the Marine Corps‘ Utility Task Vehicle, built by Polaris. Though also diesel-powered, the Army option is much larger with greater towing capacity and more onboard seating.

GM Defense leveraged their off-the-shelf capabilities to build the ISV, which is based on Chevrolet’s Colorado ZR2 midsize truck. At least 70% of parts that GM used in their ISV design are commercially available, a decision that keeps costs low. According to company specs, the ISV will use a specially-tuned variant of the Chevy Colorado’s 2.8L Duramax diesel engine.

Although specific numbers are unavailable, GM states that the ISV-tuned engine will produce “significantly more power than the Colorado ZR2 known for delivering 186 horsepower and 369 lb-ft of torque.” The ISV will also have front and rear locking differentials for better off-road performance.

In stock configuration, the ISV can transport nine passengers plus a driver in a 360-degree seating arrangement that gives the ISV good all-around visibility. The platform is modular and can be configured for different passenger or cargo configurations, depending on mission requirements.

The driver and passengers are covered by a high-tensile, low-weight steel tube roll cage—that is collapsible and can be stowed for transportation. The ISV was intended to be quickly ferried around the battle space by air, and can be carried inside a CH-47 Chinook, or in a sling underneath an UH-60 Blackhawk helicopter.

The Army’s move towards a speedy, light-weight transport comes on the heels of a similar decision by the Marine Corps—and should increase mobility at the tactical level.