Go Diesel, Scare China: Why the Navy Should Deploy Diesel Submarines to Asia 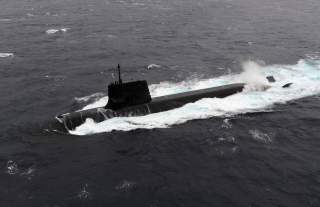 Ships of war—including submarines—are tokens of political resolve and purpose as surely as they are combat implements. They can help firm up alliances just as they can discourage potential foes from mischief-making in peacetime or pummel enemy shipping from below in wartime.

Nor does a U.S. submarine need to be an ultra-formidable and pricey Virginia-class nuclear-powered attack sub (SSN) to carry political heft. Artfully designed, deftly handed, and situated within a persuasive narrative about American purpose and power, a flotilla of diesel-electric boats could yield not just operational but strategic and diplomatic dividends along the East Asian seaboard.

And at a low, low price—a fraction of the cost of SSNs on a boat-for-boat basis. If the U.S. Navy bought, say, Japanese, it could procure about five Soryu-class diesel subs—acclaimed the world’s finest large conventional boats—for the price of a single Virginia SSN. That’s worth pondering as the U.S. military hunts for low-cost ways to impose disproportionate costs and hazards on likely antagonists—China in particular.

Writing during the late Cold War, strategist Edward Luttwak portrayed warships as political implements. A ship is a threat or promise expressed in steel. It is a threat to impose heavy costs on an adversary if its leadership insists on doing something American leadership forbids. That’s deterrence. Or a fighting ship is a threat to exact a weighty penalty from the adversary should it balk at doing something the United States demands it do. That’s coercion, and it means issuing a threat to jolt an antagonist into action rather than persuade it to desist from some action.

Either way, maintains Luttwak, deploying combat-ready capabilities at potential scenes of armed conflict casts a “shadow” that curbs “the freedom of action of adversaries.” It reminds adversaries constantly about the costs and repercussions of doing what America deems unacceptable—and nudges their conduct in a direction the United States can live with.

For instance, diesel boats can help plug the straits that permit Chinese ships and aircraft to pass into the Western Pacific or the Indian Ocean and back again. Access starts at home for China. The leadership must fret about the safety of maritime traffic from the time a ship casts off lines in Tianjin or Shanghai until it moors on the far end of its voyage. Allied navies can play on those fears for deterrent or coercive effect.

In other words, they can threaten to barricade shipping on which Beijing’s dream of national rejuvenation depends within the China seas—severing contact between the Chinese economy and foreign markets and natural-resource suppliers, and between Chinese maritime forces and distant theaters. Rigging a naval cordon would create a powerful disincentive to aggression against Japan, the Philippine Islands, or other American allies and friends in the region. It would cast dark shadows across decision-makers in Beijing.

On the reciprocal side, deploying lethal U.S. warships, whether as a solo effort or in concert with allies, helps dispel the shadow cast by a hostile navy. A vessel carries less political throw-weight if its targets know they could defeat it—and the navy it represents—if pressed. In an alliance or another multinational league, though, all partners must dedicate themselves unswervingly to their cause in order to deter or coerce. If one ally waffles or deserts its friends, it subtracts the fraction of the combined force that it contributed—and attenuates the force’s deterrent or coercive power in the process.

Allies and partners thus take heart from American fighting ships sent to their assistance provided Washington convinces partners such as Japan, South Korea, or Australia it will be there for them when the going gets tough. Building confidence takes diplomatic work. Even Batman only commands credibility with the citizens of Gotham City because he shows up whenever they shine the Bat-Signal in the sky to summon him to their defense. Otherwise, unsure whether the caped crusader would be there, ordinary folk would submit to supervillains preying on the metropolis. Lawlessness would prevail.

Allies likewise fear being left in the lurch by flighty or halfhearted friends. U.S. shipyards have not constructed diesel subs for decades. But fielding a contingent of diesel boats built on a common foreign design and stationing that contingent permanently in allied harbors would project a symbol of inflexible American commitment to the cause. Batman would always be there—and the good people of Gotham would stand against tyranny.

It sounds banal, but the simple act of being there is a lynchpin of strategic success. Filmmaker Woody Allen once joked that showing up is eighty percent of life. There’s truth in humor. The late, great Admiral J. C. Wylie might add that staying is the other twenty percent. Wylie declares that superior force on station—where it matters, when it matters, for as long as it matters—represents the determinant of success in warlike endeavors. The heavier-hitting force exerts control of someplace or something—and transmutes control into strategic and political gain.

Such a fleet, then, would cast a long shadow. Selecting a common submarine hull, making it the nucleus of an allied undersea fleet, and exercising that fleet with expertise and panache would signify capability. It would leave little doubt in Chinese minds that the allies possess not just the determination but the naval might to make good on their saber-rattling. And a potent subsurface contingent would exert a galvanic influence within U.S.-led alliances. It would hearten Tokyo, Seoul, or Canberra, letting them handle relations with Beijing with confidence rather than the diffidence natural when parlaying with a stronger foe—and doing so alone.

Let China worry for a change.

To answer the former, the bearable cost of diesel boats compared to SSNs makes them attractive at a time when the U.S. Navy cannot spend lavishly on shipbuilding. Nuclear power must not be a fetish. To answer the latter, consider the political uses of sea power once again. Unmanned submersibles boast negligible political impact compared to manned boats. They do little to show that the United States has “skin in the game” of alliance politics, as Nassim Nicholas Taleb might say, while putting American sailors in harm’s way telegraphs resolve.

Unmanned vehicles neither cow the Chinas of the world nor reassure allies of American commitment. They belong in the future fleet design to the extent the hardware and war-making methods for handling it prove out. But for diplomatic clout, they can never substitute for boats operated by human crews. No skin in the game, minor political import.

Let’s grant scholar-statesman Henry Kissinger the last word on the political uses of diesel submarines. Kissinger wrote that deterrence is a product of capability, the willpower to use that capability under well-defined circumstances, and an antagonist’s belief in American capability and will. This formula doesn’t involve addition; you multiply the three variables to estimate deterrence. Maximizing all three maximizes deterrence. There may be trouble when one or more variables plunge.

Danger looms when any element approaches zero. In strategy as in Algebra I, multiplying something by zero reduces the product to zero. No amount of physical might deters absent the will to use it; the strongest resolve avails little without adequate capability to wield; and neither capability nor resolve suffices unless we make the opponent a believer in our capability and our willpower to use it under the circumstances we specify.

The same Kissingerian logic holds for coercion except, as noted before, the goal is to spur rather than discourage some action. And it holds for reassurance except that allies, friends, or those we hope to recruit to be allies or friends represent the chief target audience.

Building a diesel flotilla, then, threatens costs Beijing would find unpalatable and might find unbearable. Conventional boats’ affordability adds to the mix, showing the allies could bulk up the fleet’s numbers yet further if conditions warrant. Forward-deploying diesel attack boats to allied ports as part of a standing fleet also signifies resolve. Forward-deployed vessels are always there—and being part of the landscape constitutes a meaningful talisman of resolve, as Woody and Wylie advise.

Political impact results. Washington may make believers of antagonists and friends alike if it does these things while conveying purpose in Asia. It can banish China’s leadership to the shadowland of doubt and indecision—and bolster the likelihood that Beijing will decide today is not the day to test allied solidarity or capability.