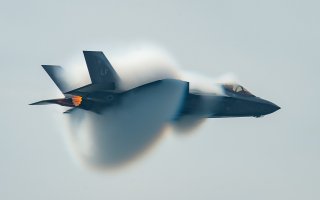 While the weeks leading up to Switzerland and Finland’s decisions to acquire the F-35 were filled with speculation and strategic thinking about NATO’s deterrence posture, the Pentagon’s F-35 Joint Program Office and Lockheed Martin were entirely silent.

This is because even if deliberations regarding potential F-35 customers are happening, the Pentagon is often deliberately silent on the topic.

Nonetheless, the pace of countries announcing plans to acquire F-35 fighters has taken even some F-35 advocates by surprise. This has fueled discussion of the jet becoming the stealth fighter of the “free world” and inspired further speculation over what country will purchase F-35s next.

What about Greece? The country has sent a formal request to the Pentagon to buy up to twenty-four F-35s. For several years now, the question of a Greek F-35 purchase has generated countless reports questioning if Greece can afford the jets or if Lockheed Martin currently has the production capacity to build them. A 2020 report in Air Force Magazine raised the possibility that Greece might be willing to buy used F-35s in order to get them faster or save money.

Regardless of how or when these issues are settled, the prospect of a fleet of Greek F-35s raises more interesting questions about NATO’s posture and capabilities. Recent developments, such as Finland’s choice to acquire its own F-35s, make a Greek F-35 force appear more likely. For instance, a networked force of Finnish, Polish, and Greek F-35s could form a defensive perimeter around eastern Europe to deter Russia. Greek F-35s could threaten Russia from the south, while Finnish and Polish F-35s could cover the north and the center. A southern F-35 force based in Greece could also reach the Black Sea and help defend key eastern allies such a Romania.

Another key variable for a potential Greek F-35 force is entirely separate from any need to deter Russia. Greek F-35s would be within striking reach of the Middle East and could assist in any operations in the region. With Turkey banned from the F-35 program, Greek F-35s could open up a 5th-generation attack corridor into the Middle East.