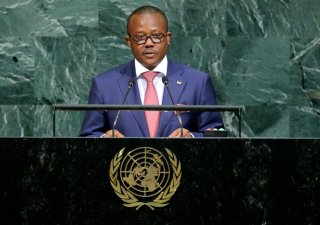 President Umaro Sissoco Embalo of Guinea-Bissau announced on Tuesday that he had dissolved the National People’s Assembly, the country’s parliament, and called elections to take place later in the year—two controversial moves intended to resolve the small West African nation’s ongoing political crisis.

In a statement explaining his decision, Embalo argued that there existed “persistent and unresolvable differences” between his office and the parliament. He claimed that the assembly had devolved into “a place for guerrilla politics and plotting,” justifying its dissolution.

“This political crisis has exhausted the capital of trust between the sovereign institutions,” the statement read. “I have decided to give the floor back to Guineans so that … they can freely choose the parliament they wish to have.”

A decree issued by Embalo scheduled the country’s next parliamentary elections for December 18, 2022, although this date is not permanent and could change through the passage of a second decree.

The political crisis Embalo referenced in his statement refers to a disagreement over the status of Domingoes Simoes Pereira, an opposition lawmaker who lost to Embalo in the country’s 2019 presidential election. As a member of parliament, Pereira enjoys parliamentary immunity from arrest, although Embalo has accused him of corruption and indicated a desire to prosecute him. Other issues dividing Embalo and the parliament include the distribution of oil revenues, constitutional changes, and the degree of Guinea-Bissau’s participation in the Economic Community of West African States, or ECOWAS.

Guinea-Bissau is separated from Guinea, its larger eastern neighbor, by a tumultuous colonial history. While Guinea became a French colony and gained its independence in 1958, Guinea-Bissau remained under Portuguese colonial rule until 1973, when it became independent following the death of Portuguese dictator Antonio Salazar. Although Guinea-Bissau is now regarded as a fragile or partial democracy, and Embalo won a competitive election in 2019, much of the country’s history is fraught with instability. Since 1974, four military juntas have taken power, most recently in 2012. Some observers described an attack in February 2022 by mutinous soldiers on government buildings in the capital as a fifth coup attempt.

Guinea-Bissau has also been a major hub for the international drug trade, serving as Africa’s main port of entry for illegal drugs that are then shipped across the continent. Although the Embalo government has pledged to crack down on Guinea-Bissau’s drug trade, its efforts have so far failed to suppress it.