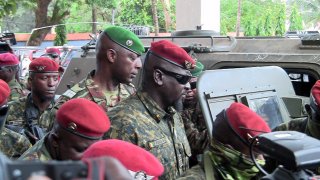 Following its successful coup d’etat in early September, the military government of Guinea has announced a “transitional charter” that will move the country back to civilian rule in the coming months.

The charter was announced on the nation’s state-run television station on Monday evening by representatives of the National Committee of Reconciliation and Development (CNRD), the ruling junta. The CNRD listed a number of tasks to be completed before civilian rule, including the organization of free and fair elections and the rewriting of the nation’s constitution.

The charter did not include a timetable for the completion of this process. However, it identified four organizations to lead the transition to civilian rule. One of them is the CNRD itself; the other three are a transitional president, a government led by a civilian prime minister, and a newly established legislature, the National Transition Council (CNT).

The CNRD appointed eighty-one Guineans to the CNT from a diverse range of political parties, trade unions, the nation’s military, and other interest groups. It has tasked the CNT with drafting the nation’s new constitution and supervising the upcoming elections, which it has banned its own members from taking part in.

The CNRD also banned more than one hundred members of the previous government from participating in the transition process.

Following the coup, Guinea has steadily been pushed into international isolation. The country was suspended from the Economic Community of West African States (ECOWAS) on September 8 and the African Union (AU) on September 10; the AU later imposed economic sanctions on the country on September 16. ECOWAS has demanded that the new government release President Alpha Conde, Guinea’s 83-year-old leader, who was arrested during the coup and has insisted that the junta hold elections within six months.

The CNRD has so far resisted these demands, and it is unclear what further steps the AU or ECOWAS could take. However, a military solution to the crisis is not inconceivable. In 2017, ECOWAS invaded the Gambia and deposed President Yahya Jammeh after he refused to recognize the result of an election he had lost.

Conde, who had ruled Guinea since 2010, was the target of popular anger in 2020 when he approved a new constitution that removed its two-term limit, allowing him to run for the presidency again. The resulting riots in Conakry, Guinea’s capital, claimed the lives of dozens of protesters. In October 2020, Conde was re-elected, although opposition groups disputed the result, citing widespread electoral fraud.

The coup was launched against Conde by Mamady Doumbouya, a 41-year-old veteran of the French Foreign Legion and a colonel in Guinea’s special forces. Doumbouya now chairs the CNRD.