Gun Sales Soar in Lithuania After Russian Invasion of Ukraine 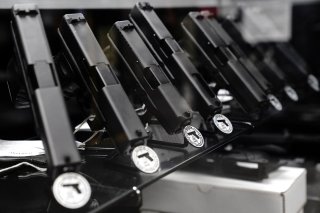 Gun buyers in Lithuania are flocking to stores. Lithuanian media report that sales have increased eightfold and applications for gun licenses have more than doubled. Media outlets also report that shooting ranges are seeing increases in clients hoping to hone their skills.

These sales are believed to be largely driven by Lithuanian fears that Russia could invade in the future.

"[Putin] has much larger ambitions in Ukraine,” President Joe Biden said in February. “He wants to, in fact, reestablish the former Soviet Union.”

All three Baltic states had been under the control of the Soviet Union and were previously dominated by Imperial Russia since the eighteenth century. Lithuania, which lies to the south of Estonia and Latvia, borders Belarus and the Russian territory of Kaliningrad. All three Baltic states are now NATO members. Lithuanians are preparing themselves for a potential Russian invasion.

Demand for all types of firearms has been on the rise, while handguns for self-defense and semi-automatic weapons that could be used in a military situation are among the top sellers. Stores have reported selling as many handguns in a week as during all of last year – and the surge shows no sign of ending any time soon.

"I already have small caliber rifles at home but never used them. But now, the disturbances are completely unimaginable. I am very scared for my children," one buyer told EuroNews.

The sentiment is now shared by many Lithuanians. Price doesn't seem to be an issue even as handguns reportedly cost around €600 ($651 USD) while semi-automatic rifles are around €2,000 ($2,171 USD). Plus, used firearms are now sold in the country for about half the price.

"Many more clients are coming. They buy semi-automatic rifles - unfortunately, I have no more to show them, I sold them out - and handguns," gun store manager Gytis Misiukevicius said to EuroNews.

"People buy handguns most probably for self-defence, as they are of course not suitable for war," Misiukevicius said. "So they buy them out of their insecurity, to protect themselves, their families and relatives should something happen. Whereas semi-automatic rifles, they can be used for firefights."

Under Lithuanian law, police can issue a license for handguns and semi-automatic rifles to those over the age of twenty-three, while hunting rifle licenses are issued to those over twenty-one. Citizens need to have a "spotless reputation and appropriate medical certificates." However, there are no limits to the number of guns that can be owned provided storage rules that must be followed.

At the beginning of this year, 92,000 licenses were issued to Lithuanian citizens, and they owned over 181,000 firearms. To put the numbers in perspective, Lithuania's population is currently around 2.7 million.

Stores across Lithuania have also reported being sold out of military-style gear including night vision and thermal vision equipment, flak jackets, and tactical clothes. However, many of those goods are not intended for domestic use. The Lithuanian Defence and Security Industry Association said that most of those goods had been sent to Ukraine as privately-funded military assistance.

Military surplus stores across Europe have seen brisk business as Ukrainian expatriates have sourced gear and equipment to fight the Russians. Further, UK surplus stores are essentially sold out of everything from camouflage uniforms to helmets and body armor.