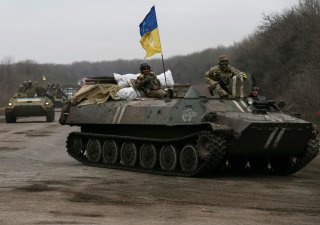 Military surplus stores across the United Kingdom are reportedly doing brisk business as Ukrainian expats attempt to source gear and equipment. Some are returning to their homeland to fight Russian forces, while even those unable to return are buying up old helmets, camouflage uniforms, and medical supplies.

"We bought everything within a 300 mile range from London," Yurii, a carpenter who has lived in the UK for seven years, told Business Insider. While Yurii is unable to return as he recently had open-heart surgery, he's among the thousands who are helping by supplying the equipment for those who can go.

One Ukrainian expat said that he has supplied thirty "British residents" who are willing to take up the fight. In total, Yurii reportedly sent five vans full of helmets, body armor, medical supplies, and even satellite phones to support the fight against Russia. The hardware was purchased with money donated from the Ukrainian diaspora. Much of the military equipment has come from surplus shops at a 70 to 80 percent discount, and some British Army veterans have even donated their own helmets and body armor.

The donated equipment is heading to Ukraine even as multiple nations, including NATO members, have pledged material and financial support for the government in Kyiv. Canada, Germany, Poland, Sweden, and Finland are among the nations sending anti-tank weapons, Stinger missiles, and machine guns to Ukraine.

It isn't just donated equipment that is heading from the UK to Ukraine. According to The Daily Mail, some 150 former British paratroopers who fought in Afghanistan are heading to Ukraine. These fighters are answering the call from Ukrainian president Volodymyr Zelenskiy, who over the weekend announced that the government was setting up a foreign legion unit.

"This is the beginning of a war against Europe, against European structures, against democracy, against basic human rights, against a global order of law, rules, and peaceful coexistence," said a statement from the presidency's website on Sunday. "Anyone who wants to join the defence of Ukraine, Europe, and the world can come and fight side by side with the Ukrainians against the Russian war criminals."

While British foreign secretary Liz Truss has said that she would support British nationals who went to fight alongside Ukrainian forces, the British Ministry of Defence has banned serving soldiers from traveling to Ukraine.

A post on the British Army's internal messaging service read: "There has been some recent media coverage relating to foreigners being welcomed into Ukraine to help fight against Russia. To be clear, as members of the British Army, you are not authorised to travel to Ukraine to support the ongoing conflict against Russia in any form, whether you are on leave or not. Please remain professional and focused on your duty and your team."

Ben Wallace, the UK's defence secretary, also warned against going to Ukraine, saying, “Unless you are properly trained, unless you are an experienced member of the armed forces, there are better ways for you to contribute to the security of Ukraine."

That could help explain why many are doing their part by raising money and combing through surplus stores to aid those who are actually trained to fight.