Ukraine to Receive a Flurry of Military Aid From European Nations 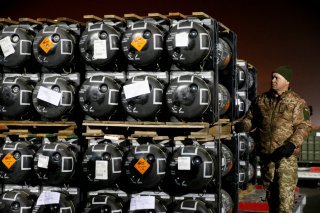 During the Second World War, the United States was called the "Arsenal of Democracy" for the vast quantities of military hardware that it produced. Today, as Ukraine stands tall against a Russian invasion, weapons and other military equipment are being offered to support Ukraine’s defense. Those efforts could provide the besieged nation with a new arsenal to maintain its democracy.

For weeks, with the threat of a Russian invasion looming, Ukraine attempted to build up its defenses. Earlier in the month, Ukrainian defense minister Oleksii Reznikov announced that his nation had received a shipment of military equipment from Canada that included machine guns, surveillance equipment, and rifles.

"We received military aid in the form of rifles, machine guns with optical sights, night vision & surveillance devices & military equipment. Thank you for this important & timely decision," Reznikov said in a post via social media. Now that the second-largest nation in Europe is fending off an invasion, other nations have pledged to provide material support.

Over the weekend, the Czech Republic announced that it would donate $8.6 million worth of machine guns, sniper rifles, pistols, and ammunition to Ukraine. "The government on Saturday approved further help to Ukraine, which is facing a Russian attack," Czech minister of defense Jana Cernochova said via a post on Twitter. "The defense ministry will also take care of transport to a place set by the Ukrainian side. Our help is not over."

Other NATO and European nations have also promised to supply weapons to Ukraine. Greece announced on Sunday that it would deploy two C-130 military transport planes with military hardware to Poland. The planes will then be transported across the border to arm the besieged nation. Portugal's government pledged to supply vests, helmets, night-vision goggles, grenades, and ammunition. In addition, the Netherlands announced that it would supply air defense rockets and anti-tank systems, including some 200 Stinger rockets and fifty "Panzerfaust 3" anti-tank weapons.

Moreover, Belgium said it would send around 2,000 machine guns, and France pledged to send defensive military equipment and consider sending offensive arms. The United States has announced that it will provide Ukraine with an additional $350 million in military equipment.

Even Germany, which has long maintained a policy not to export weapons to conflict zones, showed its solidarity with Ukraine over the weekend. The government in Berlin announced that it would also send 1,000 anti-tank weapons and 500 Stinger surface-to-air missiles in the coming days.

"The Russian invasion of Ukraine marks a turning point. It threatens our entire post-war order," German chancellor Olaf Scholz said in a statement. "In this situation, it is our duty to help Ukraine, to the best of our ability, to defend itself against Vladimir Putin’s invading army."

Weapons to the People

Instead of worrying about "getting guns off the streets," Ukrainian officials are now deploying small arms to its citizens. The Washington Post reported that over 20,000 machine guns have already been given to volunteers in Kyiv since the Russian invasion began last week.

The Ukrainian military has also instructed citizens to prepare gasoline bombs, more commonly known as "Molotov cocktails," to help slow the Russian invasion. Video shared on social media showed the weapons being distributed to those willing to stand and defend their homeland.