Has Ukraine Shown That the Tank’s Days Are Numbered? 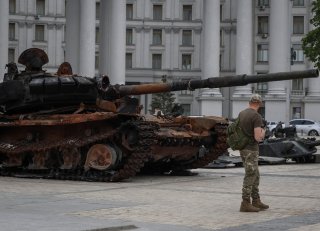 The Army’s new $9 million deal with Lockheed Martin and Raytheon to build new Javelin anti-tank missiles will surprise no one, given the effectiveness of the weapon against Russian armor and President Joe Biden’s recent trip to a Javelin manufacturing facility.

Much has been discussed regarding the tactical proficiency with which they have been employed by Ukrainian forces in their efforts to repel and destroy invading Russian forces. Not only are the weapons effective against armor, but they can also be used by mobile, dismounted units able to use buildings, terrain, or intersections to attack advancing mechanized forces with hit-and-run ambush attacks.

News networks continue to show a steady stream of video images of burnt, disabled, and destroyed Russian armored vehicles. The success of the Javelins and anti-armor weapons from other allied countries raises some interesting questions.

Certainly, few would be inclined to suggest that the tank is obsolete or somehow likely to be rendered inconsequential by the advent of weapons such as the Javelin. The Javelin has been in use for many years, and the heavily armored main battle tank is by no means obsolete. The prevailing thinking, in fact, is that heavily armored platforms such as the Abrams tank are here to stay, given their success in warfare and the uncertain pace at which lighter, composite armor materials emerge. The question is still very much alive as Army Research Laboratory scientists research new composite materials and the Army both upgrades its Abram tanks and evaluates its emerging Optionally Manned Tank program for the future.

However, if employed with successful tactics, shoulder-fired weapons such as the Javelin can have a devastating impact on armored forces and large vehicles like tanks. This is one reason why experienced combat veterans explain that tank crews very much want, or in some cases even need, dismounted infantry to operate in close proximity to them. Soldiers and networked drones, for example, can find and engage potential locations from which weapons such as Javelins can be fired.

Nonetheless, is the success of anti-armor weapons forcing strategists and military commanders to envision a more dispersed, heavily armored future force? Perhaps a large ground force can both exercise decisive lethality and reduce vulnerability to enemy attack? While the Army is likely to sustain much of its current posture regarding the value of heavy armor, authors of the Marine Corps’ new Force Design 2030 specifically cite the combat circumstance in Ukraine as something influencing the service’s move to divest its force of tanks and instead arm lighter, faster vehicles with powerful anti-armor weapons.