He Got Fired by Tom Hanks. And Then Made an Amazing Podcast About It 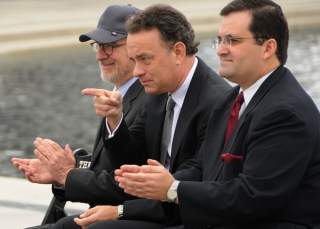 Imagine being a struggling actor. Now imagine you get your big break. A speaking part in a major HBO T.V. series, in an episode directed by Tom Hanks.

That’s right, Tom Hanks. Arguably America’s most beloved actor and, by all accounts, a genuinely wonderful human being.

Now imagine, the day before cameras roll, you get a phone call. Hanks has decided he doesn’t like you. He’s been studying your audition tape and he’s decided you’ve got “dead eyes.”

That’s exactly what happened to Connor Ratliff. In 2001, he scored a small part in the fifth episode of Band of Brothers, the HBO epic about U.S. Army paratroopers in World War II.

The part was small but, for Ratliff, at the time a struggling actor and filmmaker in his twenties, it was a big deal. After Hanks fired him, he all but quit acting for many years. And he tortured himself over the reasoning. What did it mean for him, and his dreams, that he had dead eyes?

Ratliff has spun his rejection into one of the funniest, weirdest and most compelling new podcasts of 2020. In Dead Eyes, Ratliff recalls his firing, and the years that followed, in humiliating detail.

But he never wallows. Middle-age now and established as a comedian and actor, Ratliff can afford to be philosophical about his rejection. He constructs Dead Eyes in the manner of a true-crime podcast, albeit one with very, very low stakes.

Of course, the mystery -- why really did Hanks fire him? -- isn’t really the point. Ratliff teases from the “crime” of his rejection 19 years ago all sorts of fascinating questions.

What kind of man is Hanks? (Still lovely.) What exactly are “dead eyes”? (Unclear.) What did his firing mean to the producers of Band of Brothers? (Not a damned thing.)  What did it mean to him? (Too much.) How do we move on from cataclysmic failure? (With patience and humor.)

The guests are the highlights. While struggling to get in touch with the Band of Brothers casting directors and Hanks himself, Ratliff talks with his famous friends, including a few who intersect with Hanks.

Ratliff asks his old friend and former scene partner Jon Hamm what it means to have dead eyes. He describes to his post-firing depression to Aimee Mann, the singer-songwriter whose albums Ratliff obsessed over in his depressed state -- and who has had her own fair share of rejection.

He asks Star Wars: The Last Jedi director Rian Johnson to help him understand the firing from Tom Hanks’s point of view.

And he talks to former Saturday Night Live cast member Bobby Moynihan, who famously acted alongside Hanks in the absurd, 2016 David S. Pumpkins sketch, about the razor-thin line between success and failure.

Dead Eyes launches in January 2020. Six episodes later in early March 2020, Ratliff still doesn’t know whether he’ll be able to get Hanks on the phone for a definitive answer about Ratliff’s dead eyes.

But it’s safe to say that, by now, his eyes are beside the point.