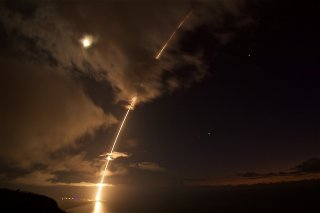 Vice Adm. Jon Hill, director of the Missile Defense Agency (MDA), said the United States is in a precarious position when it comes to hypersonic missile threats. Hill was speaking at the Combat Systems Symposium conducted by the American Society of Naval Engineers.

Hill said that tracking and eliminating hypersonic threats requires a multi-sensor approach. The Hypersonic and Ballistic Tracking Space Sensor, an asset in space, would first identify hypersonic threats and relay information to the Aegis Combat System on U.S. Navy ships. Those ships would then launch missiles at the hypersonic threat — though they don’t have many options.

Hill said that the United States would rely on the “SM-6 missile with its nascent capability to take on a hypersonic [missile],” but added that the missile is “really the nation’s only hypersonic defense capability.”

Existing land-based infrastructure offers good terminal defense against missile threats, and while these kinds of missile defenses are necessary, they are not a silver bullet.

“We’re going to leverage space cueing and fire control from space because, to handle maneuvers across the globe, you’ve got to look down.” Hill said, explaining that “field of view is limited from radars and we’re running out of islands to put radars on.”

Sensors in space can cover much more area than sensors on the ground and will offer a significant coverage advantage in the future.

“We’re going to take those first hypersonic tracking space-based sensors in coordination with the U.S. Space Force and we’re going to get them on in orbit,” Hill said. “That’s through a competitive process and we’re really excited about that. We did so much risk-reduction on the ground we’re absolutely confident that those sensors are going to deliver what we need when we put them up.”

Currently, there are two versions of the SM-6 missile in service, the Block I and Block IA. A third, called Block IB, a significantly updated model, is in development. This latest SM-6 iteration is redesigned substantially and can reportedly reach hypersonic speeds itself.

However, of note is a Missile Defense Agency test last year in which another pair of SM-6 variants, called Standard Missile-6 Dual II, failed to intercept a medium-range ballistic missile target.

The United States’ hypersonic missile defenses are in a difficult position, it would seem. Despite efforts to update the SM-6 series and optimize them for use against hypersonic missile threats, there is still much work to be done.