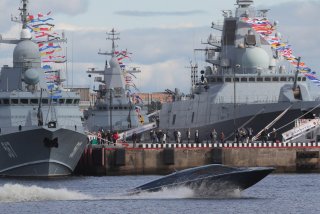 The People’s Liberation Army Navy (PLAN) enjoys an advantage in terms of numerical superiority and home-field advantage in the South China Sea. Also, the advent of China’s hypersonic missiles and anti-ship ballistic missiles make larger combatants potentially more vulnerable. A budget cuts mean that the Navy will soon face a missile deficit against China’s growing 350 plus ship Navy. This could become particularly true when it comes to being able to deny access to Chinese warships access to waters off its coast.

Smaller combatants with an oversized punch could fill the void. During the Cold War, Pegasus-class hydrofoils that combined speed with eight Harpoon anti-ship missiles apiece and a 75-mm main gun did just that. They had the radar signature of a fishing boat.

Their small size combined with electronic warfare systems could assist the U.S. Navy and its allies in attacks against China’s naval and ground forces in the South China Sea. They could move fast, hit hard, and then retreat before the People’s Liberation Army Navy PLA[N] could react, especially if they launched night raids against Chinese targets.

During the 1980s, the Pegasus-class boats, officially known as Patrol Hydrofoil Missile (PHM) boats, easily ran circles around speed boats used by drug smugglers. Their successors would no doubt be able to do the same to those used by the Iranian Revolutionary Guard Corps (IRGC) or against Chinese patrol boats in the South China Sea. The IRGC says it has 112 warships to stalk U.S. Navy vessels in the Persian Gulf.

PHMs accompanied by heavily armed high-speed drone ships could help to provide screening between larger ships such as the destroyers, cruisers and carriers, and the IRGC speedboats. Giving the Navy the ability to outrun, outmaneuver and outgun the Iranians could provide a psychological factor to keep momentum in the United States’ favor.

The original PHMs began as a pet project of late Chief of Naval Operations Elmo Zumwalt in the early 1970s. Zumwalt proposed them amid the backdrop of budgetary constraints and a need to counter Soviet and other Eastern Bloc patrol boats in the Baltic. Initial planning called for 30 PHMs, but that number fell due to a change in administration in the Navy that wanted to scuttle the program. Congress insisted on keeping it, and six were built.

Italy and Germany were supposed to have bought PHMs but dropped out of the program. The Pegasus class left the Navy’s inventory in 1993 mostly because large-ship admirals had not figured out a proper role for them. They were ahead of their time.

They operated at a fraction of the cost as a larger Perry-class frigate and proved to be highly reliable, a stark contrast with the Littoral Combat Ships (LCS) of the twenty-first century that have suffered from abysmal failures. The PHMs could travel at 48 knots (55 miles per her) on their hydrofoils without the constant breakdowns that have plagued the LCS’s. They were among the fastest vessels ever to appear in the Navy’s inventory.

A new class of PHMs could deliver speed, maneuverability, and firepower that could swarm enemy targets in conjunction with small, maneuverable, and heavily armed drone ships. Such drone ships could be the naval equivalent to the Air Force’s loyal wingman by delivering large amounts of ordnance and would be directed by the manned PHMs. These drone ships could confound enemy sensors as to which ships were manned and controlling the flotilla, and which were the robots. That could save lives in a shooting match.

We face an adversary dedicated to unconventional warfare. The Chinese Communist Party uses its naval militia to augment its power-projection abilities and to lay claim to waters in the South China Sea, threatening Vietnam and The Philippines, such as at Whitsun Reef in April.

Fighting China’s naval superiority in the South China Sea requires a rethinking of naval warfare from the perspective of a sort of guerilla warfare at sea. A fleet of PHMs could give the Navy and those of allies like The Philippines or Taiwan fast, maneuverable vessels that could conduct hit-and-run operations against Chinese naval units.

Future PHMs could also be equipped with missiles like long-range anti-ship missiles (LRASM), Tomahawks, or Harpoons based on the mission.

The PHMs were limited to drug interdiction missions in the Caribbean, a sphere traditionally reserved for the U.S. Coast Guard.

The U.S. Navy should go back to the future finding solutions for twenty-first-century seapower projection.