Help Joe Biden: Why Are US Navy Sailors Taking Out Loans to Make Ends Meet? 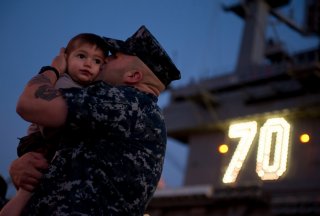 Those serving in the U.S. Navy may get to see the world, but it comes at a price. There have been reports of backed-up toilets on aircraft carriers, spoiled food, and of course the risk of contracting COVID-19 due to the close quarters. This week, reports circulated that some sailors have been forced to take out loans after being shorted on pay.

It isn’t that the Navy has stopped paying sailors, but there has been a months-long delay in pay to some service members who earned increases in their housing allowances this year. That could be due to a recent marriage or because the sailor(s) moved someplace with a higher cost of living. The result has been an uptick in loan applications from Navy personnel struggling to keep up with living expenses.

“This is happening a little bit of everywhere,” Navy-Marine Corps Relief Society (NMCRS) Vice President Gillian Gonzalez said in an interview that was quoted by FoxNews. “It doesn’t seem to hit one geographic area more than another.”

NMCRS is an organization that is able to loan money to sailors and their families.

The issue apparently began four years ago when officials began to consolidate personnel and customer support detachments. That led to staff shortages, and as a result, the pay increases haven’t reached many sailors.

Commander Matt Knight, public affairs officer at Navy Personnel Command, explained that the Department of Defense (DoD) typically requires the Navy to process Basic Allowance for Housing change requests within thirty days, although delays can be all too common.

“Navy Personnel Command and our subordinate commands take every measure to ensure the volume of transactions does not exceed our capacity, but occasionally backlogs do occur due to a variety of reasons,” said Commander Knight. “These backlogs are resolved as quickly as possible to limit the impacts to sailors.”

In some cases, the situation has been far worse. One particular case—hopefully an isolated one at that—saw a sailor who was not paid for three months due to an enlistment extension and pay error, and as a result, the individual was forced to use up savings. Navy-Marine Corps Relief sent the sailor $2,500 to the sailor at home because they were under COVID-19 quarantine. However, others in the service have taken to social media to vent their frustrations.

One sailor posted on Reddit that she and her husband were married in July but had not received their basic allowance for housing in the Washington, D.C., area. Due to the shortfalls, and unable to resolve the issue, they were forced to take out commercial loans as a (hopefully) temporary fix.

As would be expected, the shortfalls are hitting enlisted personnel the hardest. This is because a sailor’s salary depends on rank and time in service. A full-time enlisted seaman recruit makes just $1,785 per month, while a chief petty officer with eight years of experience nets $4,189.50 monthly, according to Navy figures, and that money is still taxable.

Navy officers have a higher pay grade, but for the junior officers it can still be difficult to make ends meet. An ensign’s starting salary is just $3,395.80 monthly, whereas a long-serving rear admiral can be paid as much as $10,794 a month. However, it should be noted that the Navy does provide basic housing allowances, clothing stipends, and other benefits—at least it is supposed to do so.