Need to Stop an Aircraft Carrier? Take Out the Toilets 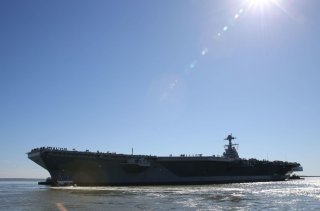 Here's What You Need to Remember: According to reports from the Washington Post, sailors had to resort to urinating in showers or into the industrial sinks at their work stations. Some of the male sailors also resorted to using bottles and emptying the contents over the side, while female sailors were holding it for so long that some developed health problems.

Waste in the military has long been a problem—but in the case of the U.S. Navy’s aircraft carriers the problem has been specifically one of human waste or more accurately how the waste has clogged the toilet systems. Earlier this year the toilets on the U.S. Navys USS George H. W. Bush (CVN 77), the newest Nimitz-class aircraft carrier, as well as the first-in-class USS Gerald R. Ford (CVN 78), were clogging frequently. Unclogging the systems cost upwards of $400,000!

The issue was brought up in a March report from the Government Accountability Office, which called out 150 systemic maintenance problems on the carriers.

But the toilet problem is unfortunately not new.

CVN 77 has had serious problems with its “heads”—the naval term for bathrooms, which comes from the days of sailing ships when the place for the crew to relieve themselves was all the way forward on either side of the bowsprit—since the warship's maiden voyage in 2011. The ship’s 493 restrooms were rendered out-of-service so frequently that it became a serious distraction for the roughly forty-eight hundred sailors on board.

The problem was first brought to light on a blog written by a “Navy Mom” whose son served on the carrier.

According to reports from The Washington Post, sailors had to resort to urinating in showers or into the industrial sinks at their work stations. Some of the male sailors also resorted to using bottles and emptying the contents over the side, while female sailors were holding it for so long that some developed health problems.

Sailors at the time of the maiden voyage blamed problems with the ship’s vacuum system, while the Navy countered that sailors were flushing “inappropriate material.” Reportedly, this includes such items as shirts, underwear, socks, feminine hygiene products, eating utensils, and mop heads!

Regardless of the exact cause, there were at least two occasions in 2011 when all of the commodes went off-line, but in other instances the heads at various parts of the carrier were offline. In total, some ten thousand hours were spent in 2011 alone trying to fix the system.

At the heart of the problem is the fact that there are 250 miles of pipe that can become clogged, and one ship-wide breakdown took a reported thirty-five-hour stretch with no rest to fix. The problem was exacerbated by the fact that there was no "backup" plan put in place—such as portable toilets or the so-called “wag bags,” which are the plastic sacks designed to hold human waste.

USS George H. W. Bush was the first carrier to use the then-new vacuum-based system, which is similar to waste-management systems used on cruise ships. It uses a vacuum-like suction to pull waste through those miles of pipes to treatment tanks, which can clean the water and return it to the sea. It operates in two primary sections, and if one loses vacuum pressure due to a clog, all the toilets on the ship are rendered unusable.

As noted, the problem hasn't been limited to CVN 77, as CVN 78—which utilizes the same vacuum system—has also had similar clogs that have taken the toilets offline. Complicating the matter aboard the USS Gerald R. Ford is the fact that it is the first aircraft carrier to feature gender-neutral bathrooms and has no urinals. The Navy’s decision was to increase flexibility when it comes to shifting berthing arrangements for the crew, but critics have noted a number of issues—from the fact that fewer than 18 percent of all the sailors in the Navy are women, and each toilet takes up more room than wall-mounted urinals.

Problems with toilets and warships aren't exactly new. The U-1206, a German Type VIIC submarine, sank during its maiden combat voyage after its captain used its high-tech toilet “improperly.”