Here Come the Nukes: The U.S. Military Has Big Plans for New ICBMs 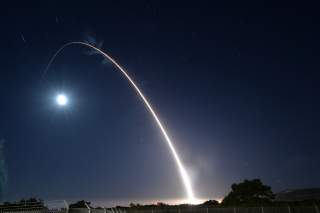 The US Air Force is taking specific steps to expedite a measured, steady developmental plan for its new, next-generation Intercontinental Ballistic Missile in order to align with the more aggressive US nuclear weapons strategy outlined in the administration’s Nuclear Posture Review.

The service is already making initial technological progress on design work and “systems engineering” for a new arsenal of ICBMs to serve well into the 2070s – called Ground Based Strategic Deterrent, or GBSD.

The most recent Nuclear Posture Review, released earlier this year, calls for an increase in nuclear weapons applications as part of a broader deterrence strategy. The NPR calls for new low-yield, nuclear armed submarine launched ballistic missiles, among other things.

“We are taking the NPR of 2010 and turning it on its head….it included no new mission. This new NPR changes that context and calls for deploying more weapons. Let’s get things done, execute on time,” Gen. Timothy Ray, Commander of Air Force Global Strike Command, told reporters at the Air Force Association Convention.

The Air Force plans to fire off new prototype ICBMs in the early 2020s as part of a long-range plan to engineer and deploy next-generation nuclear armed intercontinental ballistic missiles by the late 2020s – by building weapons with improved range, durability, targeting technology and overall lethality, service officials said

“The sum total of what we are doing is a very significant broad enterprise, which reflects the renewed interest,” Ray said.

Following an initial 3-year developmental phase, the Air Force plans an Engineering and Manufacturing Development phase and eventual deployment of the new weapons.

Overall, the Air Force plans to build as many as 400 new GBSD weapons to modernize the arsenal and replace the 1970s-era Boeing-built Minuteman IIIs.

The new weapons will be engineered with improved guidance technology, boosters, flight systems and command and control systems, compared to the existing Minuteman III missiles. The weapon will also have upgraded circuitry and be built with a mind to long-term maintenance and sustainability, developers said.

“What is new and different is that we are thinking about all the needed support and sustainment,” Ray said.

Initial subsystem prototypes are included within the scope of the current Boeing and Northrop deals, service developers said.

Senior nuclear weapons developers have told Warrior that upgraded guidance packages, durability and new targeting technology are all among areas of current developmental emphasis for the GBSD.

“We are taking a near, mid and far term assessment to make sure we do not put all the risk into the same bucket,” Ray said.