Here Comes the Stealth: How Navy Aircraft Carriers Are Getting a Big Upgrade 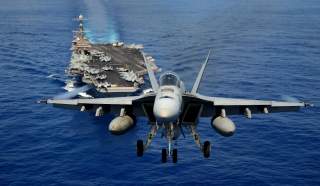 In choosing Boeing to build the MQ-25 Stingray multi-mission tanker, the Navy has opened the next major chapter in a story that began in the mid-1990s, when the sailing branch worked alongside the U.S. Air Force to develop a fighter-like drone.

Boeing will build the first four MQ-25s under the initial $805-million contract for integration in a carrier air wing in 2024. The Navy could buy as many as 72 MQ-25s worth as much as $13 billion to serve as the main tanker aircraft for carrier air wings, freeing up the F/A-18E/F Super Hornets that currently perform the role.

“When operational, MQ-25 will improve the performance, efficiency and safety of the carrier air wing and provide longer range and greater persistence tanking capability to execute missions that otherwise could not be performed,” the Navy stated.

The MQ-25 could evolve to fill additional roles, potentially including surveillance and strike. The single-engine jet’s stealthy airframe — a product of its long, contentious development — could prove to be an advantage in those roles.

In the mid-1990s the Navy and Air Force worked together on the Joint Unmanned Air Combat Sytems program, or J-UCAS — an effort to co-develop a stealthy and highly-autonomous fighter drone.

Boeing and Northrop Grumman both built J-UCAS demonstrators. Boeing’s X-45 and Northrop’s X-47 were wedge-shaped, flying-wing designs, each around 40 feet in length. The X-45 with its proprietary mission software in particular demonstrated a high degree of autonomy in ground-attack missions.

But J-UCAS collapsed in 2006 when the Air Force chose to shift resources to the F-22 and F-35 manned fighters. The Navy salvaged Northrop’s rugged X-47 demonstrator from the J-UCAS program. Under the auspices of the Unmanned Combat Air Systems Demonstration between 2007 and 2015, Northrop’s larger X-47B undertook the first carrier operations for a drone, including the first unmanned trap aboard a carrier in May 2013.

In 2013 the Navy announced the follow-on Unmanned Carrier-Launched Airborne Surveillance and Strike program to develop a stealthy surveillance and attack drone. But camps within the Navy quarreled over UCLASS’s mission set.

Should UCLASS primarily fly surveillance mission in lightly-defended air space, like the Air Force’s Reaper drone does? Or should it be capable of penetrating enemy defenses in order to attack heavily-defended targets? “You can’t afford both, you have to make your bet,” Bob Work, a former Navy undersecretary who would serve as deputy defense secretary, saidin 2013.

The Navy placed its bet in early 2016. Rather than optimizing UCLASS for surveillance or strike, it chose an entirely separate mission. Rebranded as the Carrier-Based Aerial Refueling System, the former UCLASS, ex-J-UCAS program would develop a tanker.

Critics were displeased. “The Navy suppressed the best promise for innovation in this generation,” Dr. Monte Turner and Air Force lieutenant colonel Douglas Wickert wrote in a 2016 paper for National Defense University.

Northrop competed with Boeing, Lockheed Martin and General Atomics for the CBARS contract. As the requirements drifted away from stealth and instead emphasized endurance and fuel capacity, Northrop decided to drop out. Boeing’s new design has almost nothing in common with the company’s J-UCAS-era X-45.

In contrast to the X-45’s and X-47’s flying-wing configuration, Boeing’s MQ-25 is a straight-wing, twin-tail design. But its conventional planform belies its evolution across multiple programs that shifted in emphasis from attack to surveillance to tanking. The roughly 60-foot-long drone boasts a top-mounted air-intake that’s flush with the fuselage, a low-observable design feature that Northrop experimented with in the 1980s its Tacit Blue demonstrator.

The inlet “may be a bet placed by Boeing that the Navy, once it gets the Stingray on its carrier decks, will want to evolve the aircraft from an unmanned tanker to a surveillance/strike asset that needs stealth,” Aviation Week editor Graham Warwick noted.