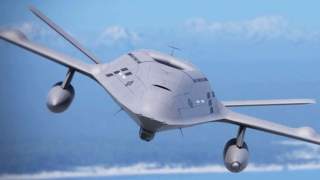 The United States Navy has awarded Boeing a $805.3 million contract to develop the MQ-25A Stingray, which will become the world’s first operational carrier-based unmanned aircraft.

While the MQ-25 will be breaking new ground, the new unmanned jet is destined to fulfill a decidedly unglamorous role as an aerial refueling tanker. However, the Boeing design—assuming the company’s prototype is representative of the eventual operational aircraft—does appear to have the potential to evolve into something more over time.

“This is a historic day,” Adm. John Richardson, chief of naval operations, said on August 30 as the contract was awarded. “We will look back on this day and recognize that this event represents a dramatic shift in the way we define warfighting requirements, work with industry, integrate unmanned and manned aircraft, and improve the lethality of the airwing — all at relevant speed.  Everyone who helped achieve this milestone should be proud we're here. But we have a lot more to do. It’s not the time to take our foot off the gas. Let's keep charging."

Leanne Caret, president and CEO of Boeing Defense, Space & Security, said in a statement that the company is already preparing for the first flight of the new unmanned aircraft, which could occur as early as 2021. “As a company, we made an investment in both our team and in an unmanned aircraft system that meets the U.S. Navy’s refueling requirements,” Caret said. “The fact that we’re already preparing for first flight is thanks to an outstanding team who understands the Navy and their need to have this important asset on carrier decks around the world.”

One of the reasons that Boeing and the United States Navy are able to move so quickly is because the MQ-25 is an “accelerated acquisition program that expedites decisions that will enable rapid actions with less overhead” compared to traditional Defense Department acquisition efforts. “The intent is to significantly reduce development timelines from contract award to initial operational capability by five to six years,” Naval Air Systems Command (NAVAIR) said in a statement. “By reducing the number of key performance parameters to mission tanking and carrier suitability, industry has increased flexibility to rapidly design a system that meets those requirements.”

Assistant Secretary of the Navy for Research, Development, and Acquisition James F. Geurts extolled the virtues of the MQ-25 acquisitions model. “MQ-25A is a hallmark acquisition program,” Geurts said. “This program is a great example of how the acquisition and requirements communities work hand in hand to rapidly deliver capabilities to our Sailors and Marines in the fleet.”

If all goes as planned, Boeing will complete the design, development, fabrication, test, delivery and support of four MQ-25A unmanned air vehicles—including integration into the carrier air wing—for an initial operational capability by 2024 under a fixed-price-incentive-firm-target contract with a ceiling price of $805.3 million. The service expects to buy 72 production MQ-25 aircraft at a total program cost of roughly $13 billion.

Executing the contract will be challenging in the short amount of time allotted, but Boeing is only responsible for the air vehicle portion of the MQ-25 system. NAVAIR is developing the carrier-based control station and command and control networks for the MQ-25 aircraft internally, which mean the service will own those technologies and be able to use those systems for follow-on unmanned aircraft.

While initially the MQ-25 will be purely focused on the aerial refueling role—being able to offload 15,000lbs of fuel to strike fighters such as the F/A-18E/F Super Hornet and F-35C Joint Strike Fighter at a range of 500 nautical miles—the Boeing airframe is clearly adaptable for future missions. Arguably, the rival General Atomics design was too focused on aerial refueling while the Lockheed Martin flying-wing design was too geared toward future modification into a strike role, the Boeing design struck healthy middle ground. The Boeing design—with its buried top-mounted intake and other low-observables features—was clearly adapted so that it could eventually be converted into a narrow-band stealth aircraft.

Indeed, the Navy seems to be moving towards adding an intelligence, surveillance and reconnaissance (ISR) capability to the aircraft in the future—which was one of the potential roles envisioned for the Navy’s previous Unmanned Carrier-Launched Airborne Surveillance and Strike (UCLASS) effort from which the current tanker program emerged. “The idea, at least as I see it, is, we can very very efficiently and effectively and for a great price put an ISR package on this aircraft and let it do its tanking mission,” Richardson told reporters. “It was very very important that [ISR] did not become a driver in terms of its … cost and design and all those things. Having said that, these days it’s very easy to integrate some ISR capability, so we’ll take a look at what those possibilities are going forward.”