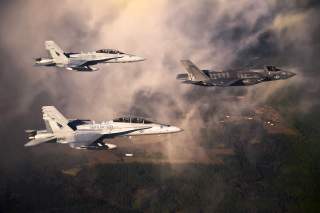 Northrop Grumman has performed a fit check of its new AN/APG-83 Scalable Agile Beam Radar (SABR) on a Boeing F/A-18C Hornet strike fighter at the request of the U.S. Marine Corps on Aug.2.

The U.S. Marines hope to retrofit roughly 100 F/A-18C/D aircraft with Active Electronically Scanned Array (AESA) radars as the service extends the operational life of its Hornet fleet before those jets are eventually replaced by Lockheed Martin’s F-35 Joint Strike Fighter.

“The Marine Corps asked for an Active Electronically Scanned solution due to the radar’s increase in reliability and sustainability with no decrease in operational performance,” Greg Simer, Northrop Grumman’s vice president for integrated avionics systems, said.

“The Marine Corps’ stated objective is to modify an in-production, fielded AESA while meeting the current size, weight, power and cooling requirements of the F/A-18 C/D. We have proven our production APG-83 SABR radar fits into the F/A-18 C/D, achieving the objectives and bringing the technical maturity needed to attain the Marine Corps fleet insertion timelines.”

The Marine Corps, which is the sole remaining operator of the classic Hornet in active U.S. military service, hopes to replace the mechanically-scanned Raytheon AN/AGP-73 radar with a new AESA radar. The Naval Air Systems Command (NAVAIR), which is managing the upgrade program for the Marine Corps, released a solicitation for the new radar on March 20.

“The APG-73 has been subject to ongoing maintainability, supportability, and readiness issues,” NAVAIR said in its solicitation.

“To alleviate these issues, the USMC is pursuing a replacement to the APG-73. Active Electronically Scanned Array (AESA) solutions are required due to the increased reliability and sustainability requirements as well as the associated capability improvements.”

Northrop Grumman is competing with incumbent Raytheon, which is offering its AN/APG-79(V)X Raytheon Advanced Combat Radar (RACR), for the Marine Corps contract. The APG-79(V)X is a derivative of the original APG-79 AESA radar, which is installed on the majority of the U.S. Navy’s Boeing F/A-18E/F Super Hornet fleet. While the original APG-79 would not fit into the Hornet or the early model Block I version of the Super Hornet, the APG-79(V)X is designed to drop into the original F/A-18 nose easily.

“The simple, non-disruptive retrofit can be performed in the field and takes less than an hour to complete.”

The APG-79(V)X would offer the Marine Corps and the NAVAIR an AESA radar that is not only common with the newer Block II Super Hornet fleet, it would also allow the U.S. Navy to retrofit older Block I F/A-18E/F aircraft with a AESA radar. From that perspective, the Department of the Navy could make a solid case for selecting Raytheon’s APG-79(V)X for the Marine Corps’ legacy Hornet fleet.

However, the Marines would also have a compelling case for selecting Northrop Grumman’s APG-83 because of that radar’s commonality with the F-35B’s APG-81 AESA radar, which is also made by the same company. The Marines hope to eventually replace all of their tactical fixed-wing combat aircraft with the F-35B and the F-35C, thus the APG-83—which is based on APG-81 technology—would offer the service commonalities across their fleet.

Moreover, the Marines could also take advantage of software and hardware commonality with the United States Air Force and other services that operate the F-35, F-22 and the upgraded F-16. The U.S. Air Force has already selected the APG-83 for its F-16 fleet and there are other air arms around the world that have also adopted the new radar.

“Our SABR team has secured its fifth production customer and now has orders for more than 400 systems, of which 56 have been delivered through the end of the second quarter,” Kathy Warden, Northrop Grumman’s president and chief operating officer, told investors on July 12.

“The F-16 Air National Guard upgrade program is progressing on schedule, with flight testing for Phase One to be complete this year and initial production deliveries to begin March of 2019. Our teaming agreement with Lockheed Martin positions us to support additional new F-16 buys and capability upgrades of existing F-16 fleets worldwide, highlighting SABR's superb capability, reliability, interoperability and long-term affordability.”

It is not clear when NAVAIR will make a decision on which radar it will select for the Marine Corps’ Hornet fleet, but the Department of the Navy does have a set timeline for fielding the new upgrade. “In order to meet fleet readiness requirements, retrofit installations will begin in 4th Quarter 2020 and complete in 4th Quarter 2022, for fielding of a total of 98 systems (7 fleet squadrons retrofitted with 14 replacement radars each),” NAVAIR said in its solicitation.

As of right now, it is a toss up as to which radar NAVAIR will select. Either way, the Marines’ legacy Hornet fleet will receive a massive boost in combat capability. Moreover, there are plenty of legacy Hornets in still service around the world—such as in Canada and Spain—which might eventually be upgraded in lieu of being replaced. Thus, winning the Marine Corps tender might open doors to the larger international Hornet upgrade market, which could prove lucrative to the winning contractor.