Here's How Taiwan Could Still Build Its Own Submarines 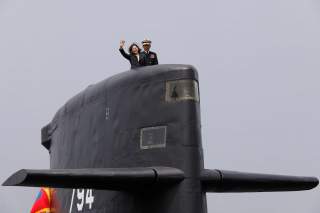 Key point: Taipei needs to keep up its naval strength if it is to deter a Chinese invasion.

Taiwan wants new submarines to replace its two 1980s-vintage front-line boats. But China has leaned on every major submarine-exporting country to not conduct business with Taipei.

So Taiwan is going it alone, with some technical assistance from companies in the United States and Japan.

Everyone knows the Indigenous Defense Submarine program is risky. But one Taiwanese expert believes it could succeed.

“It is expected that the first submarine will be launched in 2024,” Yawen Tsao, a research assistant at Taiwan’s Democratic Progressive Party mission in the United States, wrote at The Diplomat.

Not everyone in Taiwan is so sanguine on the prospects of the island country building all, or any, of the eight diesel-electric submarines the navy says it needs, Yawen conceded. The opposition Kuomintang of China political party, or KMT, is skeptical that the government under DPP president Tsai Ing-wen can see the subs through development, Yawen explained.

During a campaign event on Nov. 9, [2019] in Keelung — a northern port city that also happens to host one of Taiwan’s major naval bases — KMT presidential candidate and Kaohsiung mayor Han Kuo-yu claimed that he has doubts about this policy. “Do we have the capability of producing engines and complex interior systems?” Han queried.

He then went on to advise the DPP government to “not bite off more than you can chew.” Instead, Han declared that if he is elected, he would develop Taiwan’s artificial-intelligence technologies and adopt Lee Kuan Yew’s “poisonous shrimp” defense strategy — one designed to signal any larger country that trying to swallow the island state would be painful.

Han’s comments were met with pushback from multiple sectors of Taiwan’s political and policymaking world. Premier Su Tseng-chang expressed great dissatisfaction in response to the mayor’s skepticism, calling Han’s ideas out of touch with reality.

Han should not look down on the Taiwanese military’s capabilities, said Su: “Many areas of Taiwan’s technological developments are confidential, but as President Tsai promised, the indigenous submarine will impress everyone in the future.”

The submarine program is highly classified, Yawen explained, but there are signs that it’s making progress toward its goal of launching the first submarine within five years.

Taiwan’s navy headquarters reaffirmed Tsai’s statement that the progress of the IDS is on schedule: the first phase was completed in March 2019 and duly reported to the Legislature Yuan in March and the Control Yuan in April [2019].

Under the supervision of these two government branches, it is expected that the first submarine will be launched in 2024. In addition, the Keelung Submarine Park is also scheduled to attract foreign investment and technology transfer to promote the development of the domestic industry and provide local job opportunities.

The hard work on and potentially multi-billion-dollar cost of the new submarines both are worth it, Yawen posited.

Similar to missiles, submarines can effectively deter China’s intention to invade. In May 2019, Tsai again expressed the importance of submarines and her administration’s determination to develop indigenous defense systems. “Submarines not only can build up our asymmetrical power but also will more effectively deter patrols of the enemy ships,” the president declared.

In asymmetrical warfare, indigenous submarines will largely improve the navy’s combat capabilities. The defense vulnerability in the southwest waters of Kaohsiung Port will be strengthened significantly if Taiwan possesses indigenous submarines, which can help Taiwan soon gain the command of the sea.

In the event of the outbreak of war, submarines would be able to quickly break through the Chinese blockade and deter Chinese troop transport ships, landing craft, and hovercraft from approaching Taiwan.

Yawen called for national unity to ensure the submarine project succeeds. “It is crucial for politicians in countries like Taiwan, facing enormous pressure from a neighboring country and under the threat of asymmetric warfare capabilities, to be unified and supportive when it comes to national-defense issues, irrespective of political ideology and background.”