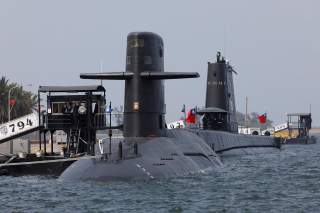 Taiwan has broken ground on the shipyard that could build the country’s first new submarines in nearly 40 years. But the island state’s defense minister signaled uncertainty about whether, and how fast, the navy might actually get new undersea boats.

“We are far behind” in submarine warfare, former Defense Minister Michael Tsai said at the Hudson Institute in Washington, D.C. in September 2019. “We need technical support from the United States, Japan and other countries.”

Facing a de facto embargo from the major submarine-builders in Europe, the government in Taipei in the early 2000s negotiated with the administration of U.S. President George W. Bush to buy new diesel-powered subs from the United States.

But China pressed the United States not to provide the subs. And besides, U.S. companies haven’t built diesel boats in decades. The 2000s deal “fell apart,” reporter John Grady wrote at the news website of the U.S. Naval Institute.

Now Taiwan has no choice but to build its own undersea vessels. But it needs help with certain key technologies including torpedo systems and combat integration, Grady explained, citing Seth Cropsey, a naval affairs analyst at Hudson.

If Taipei fully funds the ambitious project and nothing happens to disrupt the flow of foreign technologies that the island country will rely upon as it establishes its own sub-building industry, the Taiwanese navy could possess its first new undersea boat as early as 2026.

The new diesel-electric submarines would replace Taiwan’s four very old, existing subs, only two of which possess any meaningful combat capability. With new subs, Taiwan could seriously complicate any attempt by China to stage an amphibious invasion of the island.

Taiwan’s president Tsai Ing-wen in May 2019 unveiled a miniature model of Taiwan's prototype indigenous submarine during a groundbreaking ceremony at a factory in Kaohsiung, Singaporean news agency CNA reported.

Speaking during the groundbreaking ceremony, Tsai said her administration is determined to develop indigenous defense systems and building an indigenous submarine will greatly boost the navy's combat capabilities in asymmetrical warfare.

The military currently has four submarines in its fleet, two of which were purchased from the United States in the 1970s, while the other two were bought from The Netherlands in the 1980s. Due to pressure from Beijing, The Netherlands has not sold Taiwan any more since then, she noted.

"Therefore we have no other choice but to build our own indigenous submarines," Tsai said.

After overcoming challenges over the past years, Taiwan has finally obtained export permits for the key technologies needed to design its own submarines, she said, expressing hope that this first step will be a success for the project.

Taiwan’s current submarine fleet actually is in worse shape than CNA’s coverage implies. Taipei ordered the two Hai Lung-class vessels from the Netherlands in 1980 and received them by 1988.

The Dutch-made submarines are heavily-armed with American Mk. 48 torpedoes and Harpoon anti-ship missiles, but at more than 30 years old they soon could begin to suffer mechanical problems that in turn could compromise their ability to avoid detection by sonar.

Taiwan’s other two subs are ancient by the standards of any navy outside of North Korea. The Hai Shih and Hai Pao are former U.S. Navy vessels that the Americans built at the end of World War II. Knowing full well that the museum-quality boats would never survive in combat, the Taiwanese navy uses them strictly for training.

If the scale model of Taiwan’s new submarine design is any indication, the new class of undersea boats promises to be fully modern, CNA reported. “The model features an X-form rudder system instead of the traditional cross-shaped rudder.”

“The use of X-form rudders aims to improve underwater maneuverability, reduce collision risk when docking and lower noise from propeller-flow interactions, according to F. S. Mei, director of the U.S.-based Taiwan Security Analysis Center.”

Geography favors the defensive use of submarines. The Taiwan Strait separating China from Taiwan is just 140 miles across at its narrowest point. But its shallow depth and rough undersea terrain offer ample hiding spots for small submarines and could reduce the effectiveness of surface ships’ sonar.

It would take only a few successful attacks for the Taiwanese submarine fleet to devastate a Chinese amphibious force.

The Chinese military in 2019 still lacks the ability decisively to conquer Taiwan by way of a full-scale amphibious invasion, according to the 2019 edition of the U.S. Defense Department’s annual report on Chinese military developments. “An attempt to invade Taiwan would likely strain China’s armed forces and invite international intervention,” the report concludes.

But the Taiwanese submarines would have competition. The Chinese navy is building up one of the world’s most powerful submarine fleets. China by mid-2019 has acquired six nuclear-powered attack submarine and 50 conventional attack submarines.

“The speed of growth of the submarine force has slowed and will likely grow to between 65 and 70 submarines by 2020,” according to Pentagon’s report.

Tsai, the former Taiwanese defense minister, said the navy might go shopping for used submarines as a stopgap while it awaits the new, homemade boats. “We are still seeing if we can purchase used submarines for Taiwan,” Tsai told the audience at the Hudson Institute.

But it’s unclear why the same countries that have refused to sell Taiwan new submarines, including The Netherlands, France and Germany, would be willing to sell it used ones.

Japan builds advanced diesel submarines and tends to replace them at a high rate, meaning there are usually some in storage. But as a matter of policy, Tokyo has never exported its modern subs, used or new.

The United States is Taiwan’s only major arms-supplier and the likeliest contributor to Taiwan’s program to develop a new indigenous submarine. But there are no used diesel boats in reclaimable storage in the United States.

Realistically, Taiwan’s only option for acquiring submarines is to build them new, and mostly by itself.