Here's What the U.S. Army Hopes Its New Scout Helicopter Can Do 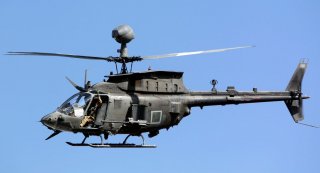 The U.S. Army’s new Scout helicopter is intended to travel at speeds greater than 200 knots and launch fast hit-and-run offensive operations. It also will conduct forward reconnaissance and operate aerial drones from the cockpit, should the service’s current vision for the Future Attack Reconnaissance Aircraft come to fruition.

The Army recently awarded development deals to Sikorsky (Lockheed) and Bell for the platform, which is intended to replace the now-retired Kiowa Warrior helicopter.

Both the Kiowa and the Apache have, for years, been successfully operating high levels of manned-unmanned teaming wherein helicopter crews control drone flight path and sensor payload from the cockpit. Such a system has provided a considerable tactical advantage, Army pilots say, because in many instances it allowed them to identify targets of relevance before taking off. Therefore, it is by no means surprising that the Army envisions advanced manned-unmanned teaming for its new FARA, which will likely interoperate with what Murray described as an emerging drone called Future Unmanned Aerial System.

“Some of these are vertical take off and some are quadcopters. We have fielded two brigades and we have two more this summer. We will have 5 different vendors and 5 different designs in the field before we ever write the requirements document. They are flying at Fort Riley, Kansas, as we speak. The fire dept was using our UAS to pinpoint fire locations and direct firefighters around,” Murray said.

This manned-unmanned teaming phenomenon, which Army helicopters have been on the forefront of for more than 10-years, is an area of heavy emphasis moving forward. As machine learning and AI-enabled computer systems become both more advanced and more available, helicopter flight crews will be able to command multiple drones at one time and rapidly access organized sensor data. Advanced algorithms can already gather, analyze and transmit key information from an otherwise disparate or stovepiped series of sensors, performing near real-time analytics discerning precise enemy targets, positions, and movements. Certain programs can also analyze context and assess a host of fast-changing variables in relation to one another—such as weather, altitude, enemy movements, terrain and navigation details.

Bell describes its FARA as a “low drag tandem cockpit airframe with a lift-sharing wing.” Sikorsky’s FARA aircraft appears to have built its helicopters with counter-rotating coaxial rotor blades, a technical configuration engineered to maximize massive speeds while also maintaining a balanced, steady, smooth vibration. Such a design also relies upon some kind of thrust-propulsion mechanism in the back. The combination of these applications, referred to as a kind of compound configuration, are what gives the new platform unprecedented speeds without compromising flight trajectory or balance. Sikorsly’s Raider X has been in development for a while now, as early prototypes demonstrated speeds well above 200 knots years ago.

New speed dimensions naturally bring an entirely new sphere of tactical considerations. For example, not only can 220-knot scout helicopter speeds enable an aircraft to approach, surveil and possibly attack in an instant before leaving a high risk area or “hot zone,” but advanced speed can also greatly expand combat flight radius. That means mission can preclude the need for what’s called FARPs, Forward Air Refueling Positions. In short, the new FARA will be able to conduct longer, faster, more lethal missions. Furthermore, when coupled with the kinds of next-generation, long-range sensors and targeting technologies now in development for FARA, scout helicopters can easily double as fast-attack platforms. In a combat circumstance, for instance, FARA could, by itself or in tandem with forward-operating drones it controls, test heavily fortified enemy defenses, attack enemy targets, send back real time video of enemy attack positions and gather other sensitive combat intelligence information such as terrain, navigational or air-threat challenges. In fact, the Future Vertical Lift program has been developing an emerging automation technology called Controlled Flight Into Terrain, a computer-enabled system which can temporarily take over flight of an helicopter in the event that a pilot is incapacitated due to combat injury. Such a technology, which will continuously update its database through machine-learning, can help avert collisions with the ground or surrounding terrain—and possibly even sustain some kinds of reconnaissance missions before landing safely. Years ago, this kind of technology, described as something to “ease the cognitive burden” upon human pilots, was first identified as HMI—human-machine interface. The concept is to free up more dynamic characteristics associated with human decision-making by relying upon computer automation, and now AI and Machine Learning, to perform otherwise time-consuming analysis and procedural tasks. Such a technical synergy is intended to best leverage those many qualities unique to human cognition.

Along similar lines, both the FARA and legacy platforms such as the Apache operate with emerging technology known as Degraded Visual Environment (DVE)—a technical system which safely navigates the aircraft in a “brown out” type of scenario where vision or standard line of sight is lost. Perhaps a snow storm or windy desert landing might otherwise force a helicopter to crash by virtue of losing awareness of where the ground or a nearby mountain is. In such as scenario, the DVE system would preclude that type of disaster. Also, one long-standing requirement for FARA, and frankly other helicopters as well, is described as an ability to operate in high-hot conditions (6,000 feet, 95-degrees F) where atmospheric conditions can make it much harder to operate helicopters. Some of these initial concepts, which have evolved and advanced considerably in recent years, were first laid out by the Army years ago (2014 Army Report HERE).

One bottom line with all this, interestingly, is that the combat-tested Apache helicopter is going nowhere soon. While it might be a Big 5 1980s-era platform, it has been upgraded and improved so many times that it is virtually a new aircraft. In recent years it has received a new, much more powerful 701D engine, composite rotor blades, new, more reinforced exterior coatings, longer-range MTADS (advanced targeting sensors) and focal plane array small arms fire detection systems. Apaches are of course built to withstand small arms fire, yet they have in recent years been fortified by a number of experimental small arms detection technologies. These are key, as it can help Apache crews locate and then counterattack the sources of incoming fire. Over the years, various iterations of these kinds of sensors have included acoustic systems engineered to detect the sound signature of enemy fire, various light-detection systems to find the muzzle flash of enemy weapons and of course thermal-signature technologies able to find the heat signal emerging from incoming attacks. There have been many systems like this over the years; one of them was called Ground Fire Acquisition System, and yet another was called Hostile Fire Detection System. Finally, perhaps of greatest significance when it comes to the future of Apaches, the platform is increasingly built with the technical infrastructure necessary to accommodate and integrate new weapons as they emerge, such as a successor missile to the hellfire, new laser-guided rockets and even laser weapons themselves. What all of this amounts to is that the most advanced Apaches will fly alongside and work with the new FARA platforms when they arrive.