Here's What You Need to Know About the Coast Guard's Icebreakers 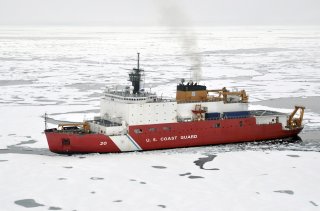 Although the name “icebreaker” implies that all an icebreaking ship does involve smashing ice, they perform other tasks. Many of their other tasks overlap with those of more conventional Coast Guard ships.

A recent Congressional Research Service document lists icebreaker missions as follows: conducting and supporting scientific research in the Arctic and Antarctic; defending U.S. sovereignty in the Arctic by helping to maintain a U.S. presence in U.S. territorial waters in the region; defending other U.S. interests in polar regions, including economic interests in waters that are within the U.S. exclusive economic zone (EEZ) north of Alaska; monitoring sea traffic in the Arctic, including ships bound for the United States; and conducting other typical Coast Guard missions (such as search and rescue, law enforcement, and protection of marine resources) in Arctic waters, including U.S. territorial waters north of Alaska.

The United States’ current ice breaker fleet is tiny — just one heavy icebreaker and one medium icebreaker. There is a second heavy icebreaker in the fleet, but following an engine failure in 2010, that second ship has been non-operational and now used as a source of spare parts.

The two current icebreakers are old — very old. They entered service in 1976 and 1978, respectively, and although both were initially slated for thirty-year service lives, they’ve been in service much longer than anticipated.

Ideally, the Coast Guard would like to have a six-ship icebreaker fleet consisting of three heavy ice breakers and and three medium ice breakers.

While it is true that climate change is rapidly eroding the amount of ice at both the earth’s poles, that does not mean there will be less of a need for icebreakers in the future. Melting ice could, in fact, lead to an increased demand for icebreakers. Regions of the far north that were once permanently inaccessible could, with help from ice breakers, become commercial transit lanes or areas that could become commercially profitable, potentially via mineral extraction.

These activities would all likely require a considerable amount of support from icebreakers.