How Russia’s Biggest, Most Powerful Nuclear Icebreakers Will Win the Arctic 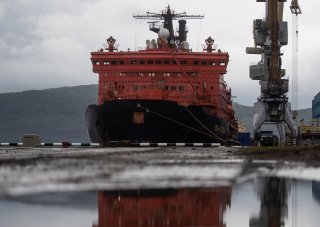 During the period of relative peace enjoyed after the Second World War, the Soviet Union diverted its substantial war-time industrial capacity towards the cold north. It built icebreakers—and lots of them. The Soviet Union’s icebreaker originals were steam powered and were later replaced by more powerful and substantially more capable diesel models. The goal: to carve out route into the normally ice-bedecked seas north of the Soviet Union.

Like post-war aircraft carrier design, diesel models were relatively quickly replaced with even more capable nuclear-propelled icebreakers, larger than anything else the Soviet Union had produced. And they worked. The Soviet Union was the first country to reach the North Pole. In 1977, the Arktika became the first surface ship to reach the northernmost point on the globe, proving their worth. Still, this high-achieving class is rather old, and the Project 22220 class is set to replace it.

The Project 22220 design is among the newest icebreakers in existence. The first of the class began construction in the early 2010s, though the class has not yet been introduced into regular active service.

The design philosophy is simple: break ice. Contrary to popular belief however, icebreakers do not crush sea ice into nothingness just through pure force. They benefit from a few unique and highly beneficial characteristics.

The first of these is icebreaker’s different bow shape. While most ocean-going vessels have hydrodynamically-efficient bow shapes that are sharply pointed, icebreakers have a more gently-sloped design and have a much flatter keel (the underside surface of a ship). The design allows icebreakers to trundle up onto the ice and break it from above, in essence sinking into the ice.

The other factor that aid icebreakers is a so-called bubbler system deep underneath the waterline—essentially piping—that shoot jets of very hot steam into the water below the ice. This melts the ice from underneath just enough so that ice directly ahead of the behemoths can be more consistently broken than would otherwise be possible.

The advantage of nuclear power in this context is two-fold—power output is incredibly high, allowing thicker ice to be crushed, in theory at lease. The other benefit is logistical simplicity. Without needing to refuel for the duration of the Project 22220’s life, a higher patrol tempo is possible. Limitations are only human in nature: the Project 22220 class can only be at sea as long as food and water hold out.

The lead hull of the Project 22220 class is stationed at Murmansk, next to Russia’s Barents Sea coastline. Once ready for regular patrols, the class will represent the most powerful class of icebreakers, and advantageously poise Russia to take advantage of sea lanes in the north that stay ice-free longer and longer into the year. The Arctic is the next area of strategic competition—and Russia is winning.