Heritage Barkeep: A .22 LR Single-Action Revolver For Less Than $200 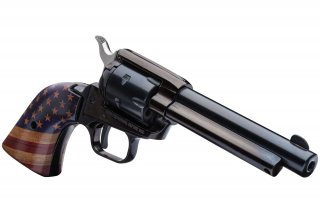 Do you want to own a .22 pistol for less than $200? The Heritage Barkeep seemingly has you covered. I was at a local sporting goods store when I first laid eyes on this thing. It was a tiny single-action .22 revolver with a tacky American flag paint job on the grips. At that moment I knew I needed to have it. After all, who doesn’t want a .22 plinker in the body of a classic cowboy gun? Now did my little bit of cash go to waste or was it money well-spent?

I’ve seen the other pistols in Heritage’s lineup and they look pretty good. They have nice wood grips. Some of them even have pearl grips. Mine does not. I love the look of the American flag and what it stands for, but man do I hate it when guns have it painted on them. Paint aside, I like the appearance of this thing. It looks classic even though it has a two-inch barrel. It features an exposed hammer, a .22 chamber, and, uniquely, a hammer safety. Hammer safeties aren’t something you usually see on this style of a revolver, so I was pretty happy with that.

Although .22 caliber pistols are fun to shoot, cowboy pistols in .22 are a lot more fun to shoot. For whatever shortcomings the barkeep has, it makes up for in barrels of fun. Nothing compares to shouting classic cowboy lines out while shooting this thing. The trigger feels decent for its price. It’s absolutely not a particularly high-quality gun, but it’s not trying to be. It just works and feels good to shoot.

It is worth mentioning that what’s not fun is reloading this thing. It does not come with an integrated ejection rod. What that means is that an ejection rod is included, it’s just not part of the gun itself. It’s not a big deal, but it feels like it takes away from the experience just a little bit.

On the bright side though, it functions just fine. I had maybe one misfire over hundreds of rounds, but it’s a revolver so who cares if it did?

The Barkeep is one of those pistols I keep around to introduce my nieces and nephews to shooting for the first time. It’s easy to be safe with this pistol. Bigger calibers and semi-autos can be intimidating to new shooters and kids, so starting them off with small guns and calibers is the way to go. That hammer safety is a real plus too.

Listen, compared to other .22 pistols out there, this isn’t the best option, but it’s a heck of a lot of fun and I’d recommend anyone into .22s and cowboys to give it a shot. It’s only $180 after all. It’s a cool little thing to keep around and I think it’s going to make it to more than a few range days.