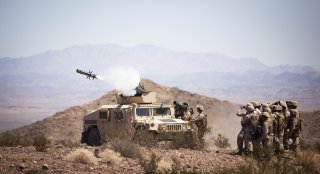 The U.S. Marine Corps is developing a transportable and highly expeditionary missile-armed ground robot vehicle able to maneuver into attack positions from land and sea.

It is a teleoperated robot missile called the Remotely-Operated Ground Unit for Expeditionary Fires (ROGUE Fires). This is a survivability-enhancing element of the U.S. Marine Corps’ Navy Marine Expeditionary Ship Interdiction System (NMESIS), which adapts the ship-launched Naval Strike Missile (NSM) from the ground. The program is designed to use a missile-armed robot. This teleoperated transport vehicle, known as the Remotely-Operated Ground Unit for Expeditionary Fires, is a key element of the system.

“By going with a teleoperated vehicle, we increase the survivability of the crews because they’re not co-located with the launcher, which tends to be what gets targeted,” Joe McPherson, the program manager for Long Range Fires at Marine Corps Systems Command, told a staff writer for the Defense Visual Information Division Service, which is a Defense Department publication.

Mounted on a Joint Light Tactical Vehicle type of platform, the so-called ROGUE Fires operates with a remote controller to command multiple launchers. Interestingly, the vehicle can function either in teleoperations mode or more fully in autonomous mode. Teleoperated options enable human decisionmakers and Marines to make the decision about when or if to fire the missile, but the targeting, sensing and surveillance would all be done by the vehicle. New engineering feats in the world of autonomy have made it possible for a robot to have the advanced algorithms necessary to avoid obstacles or independently change course as needed. In keeping with Pentagon doctrine, McPherson was clear to emphasize in the Marine Corps public relations article that humans will always remain in control when it comes to the use of lethal force firing from the robotic vehicle.

“The actual fire control system that fires the missile is completely separate from all of the self-driving and autonomy,” McPherson said. “There’s always a Marine who does the mission plan and actually fires the missile.”

The NSM-armed ROGUE Fires robotic vehicle has been demonstrated multiple times, including instances where it adapted its flight trajectory to adjust to a new target and maneuver around obstacles. Described as a “non-linear” flight path trajectory, the NSM was able to fly as far as one hundred miles while maneuvering around obstacles to its target.

“We made it fly a [non-linear] route to simulate what Marines would experience in a real-world situation, where they may have to navigate around friendly and neutral shipping or any other impediments between the ground-based firing position and the target,” McPherson said.