History Shows Why Naval Mines Are No Joke 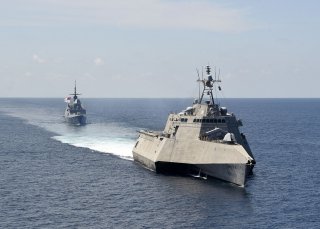 As the Navy accelerates its development of offensive and defensive mine-warfare technology, service weapons developers often look to history for key lessons regarding the tactical and military implications they present. Although technology has long since progressed since even the days of the Gulf War in the early 90s, both shallow and deep water mines continue to present a serious problem for U.S. Navy ships on patrol—just as they have done throughout the years. Large numbers of blue or deep water mines are an increasing threat, according to Navy weapons developers who are refining new mine-warfare strategies.

The significance of the mine threat is well articulated in a 2011 Naval War College Review article called “Taking Mines Seriously—Mine Warfare in China’s Near Seas.” Author Scott Truver says “mines are ‘weapons that wait.’ They are the quintessential naval asymmetric threat. Since the end of WWII, mines have seriously damaged or sunk almost four times more Navy ships than all other means of attack combined.”

Industry and Navy countermine technology developers are all too aware of the toll mine warfare has taken on U.S. forces throughout history. For instance, an interesting 2015 essay from Naval History and Heritage Command, called “Mine Warfare,” recalls a catastrophic mine attack on U.S. forces during the Korean War in the 1950s. The essay specifies an instance in 1950 during the well-known Battle of Inchon amphibious assault:

“…On September 26, off North Korea, U.S. destroyer Brush struck an enemy mine that killed 13 sailors, wounded 34 more, and put the ship out of action. Two days later YMS 509 of the ROKN sustained damage from a “floater” on the south coast. The next day Mansfield, spared at Inchon, hit a mine in North Korean waters that sent her to a shipyard in Japan. Then, in one day, October 1, Communist mines destroyed the wooden-hulled U.S. minesweeper Magpie, killing or injuring her entire crew of 33 men, and badly damaged ROKN YMS 504…..(“Mine Warfare,” Naval History and Heritage Command, Edward J. Marolda, 2015).

Decades beyond WWII, mines have claimed U.S. lives and introduced significant levels of combat danger and peril. The Navy’s Frigate, the USS Samuel B. Roberts, was devastated by Iranian-laid mines in 1988 in the Arabian Gulf. An essay on the incident written by Navy History and Heritage Command, explains how USS Samuel B. Roberts crew members battled dangerous, raging fires while the ship was “slowly but inexorably sinking.”

Several years later during the Gulf War, the Navy’s helicopter carrying USS Tripoli was disabled by a mine attack, which exploded at 25-foot hole in the forward starboard section of the ship, according to a 1991 UPI news report. On the same day, a guided missile cruiser, the USS Princeton, was also hit by a mine; the ship’s midsection was cracked and the ship had to cut power by 50-percent due to damage to a propeller.

“Mines are weapons that can wait.”